Meet Nick Abbot, a 31-year-old deaf man. Several weeks back, Nick was using Facebook and stumbled upon a post by NFR Maine, an animal rescue organization in his state.It highlighted an “amazing” puppy named Emerson who overcame a serious illness as an abandoned newborn, which left him deaf.Emerson was the only one yet to be adopted of his litter — until Nick Abbot showed up in his cape.

“He came straight to me at the door and sat right away at my feet and stayed there,” Nick told WABI.And it was soulmate-ship at first sight. When Nick arrived at the shelter, 12-week-old Emerson made a beeline for the Mainer and clung to him for the entire visit. Of the experience, Nick explained that he “knew right then and there” that he and Emerson “would get along and understand each other pretty good.”

Once the pair got settled at home, Nick started teaching Emerson sign language — and the pup is picking it up like a champ. He already understands the signs for “sit” and “lie down!” 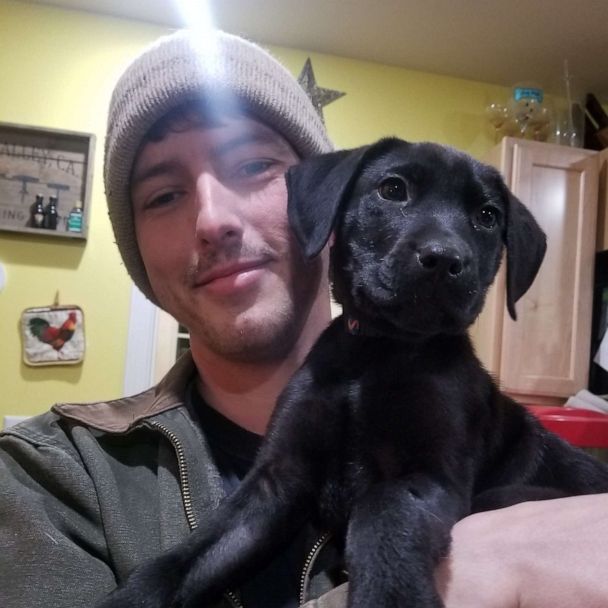 When asked about his new four-pawed pal, Nick enthused, “The bond that we have is awesome.” He gushed about them understanding “each other very well” and praised Emerson for being “special.”

“We just had a really tough time finding him the PERFECT home,” a Facebook update from NFR read.

“Nick reached out with interest in Emerson because he too is deaf! Nick said he was interested in meeting Emerson because they would understand each other, being that they both share the same hearing difficulties.

“When Nick and his Mom walked into the house to meet Emerson, Emerson made a direct line for Nick and sat at his feet. That’s all it took. I was sold that this was fate, and these 2 belonged to each other.”

Pet adoption is a win-win for people and the pets we welcome into our hearts. Did you know that:

Six and a half million animals enter shelters annually.

One and a half million shelter animals are euthanized every year, and most that meet their ends are differently-abled.
Pet ownership decreases human blood pressure, cholesterol, and triglyceride levels.
Additional studies show that domesticated animals make us happier, help us live more fulfilling lives, and can even catch our cancers early. So what’s the holdup? Make like Nick Abbot and go find the rescue animal of your dreams! Both you and they will be better off for it.