80-year-old Eugene Bostick lives on a 3-acre land in East Fort Worth, Texas, with his family. His home is located on a dead-end street with a horse barn and according to Bostick, ever since they lived there, people have dumped dogs in their land and have left strays there to starve or die.

They took countless animals and several stray dogs under their care, and after his retirement, Bostick and his family spent their time looking after the animals in their land. Everyday, they feed the animals, take care of them and take them to vet trips. Bostick also built a dog train to bring his pet friends out on adventures, and if that’s not the best retirement job in the world, then I don’t what else is.

Bostick is a lively and energetic man even in his 80s, but with so many dogs to take care of, he needed some sort of vehicle carry them on to go on trips. He came up with the idea of the train after seeing a guy driving a tractor with carts filled with rocks attached to the it. 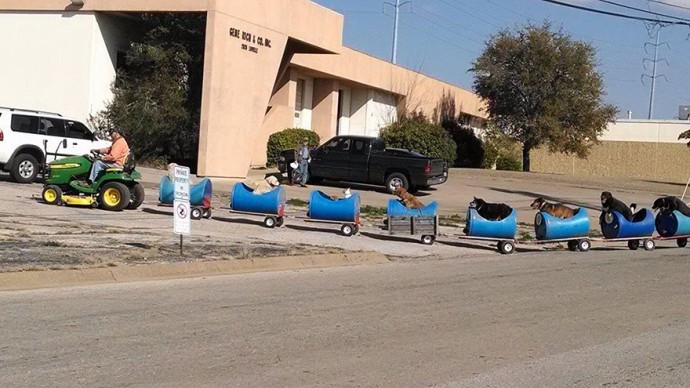 The tractor inspired him to use the same concept for the dog train, so he took plastic barrels, cut them, put wheels underneath and tied them together. Since he is a skilled welder, it wasn’t hard for him to bring his idea to life.

The dogs love to read on the dog train. After the initial excitement, when they bark a lot, they get quiet and look around for the entire ride. An usual ride lasts approximately 1 hour and 30 minutes, and they go along the Sycamore Golf Course, which is just at the back of the Bostick property.

Needless to say, every time the train passes by, golfers stop and take pictures of the happy bunch reading on the train.

80-year-old Eugene Bostick of Fort Worth, Texas, has the job all retirees would love to have: he is a dog train driver.

Bostick’s dog train has earned some attention, locally and on the internet. He always wanted to take his dog friends on little trips and so he came up with the idea of the dog train. 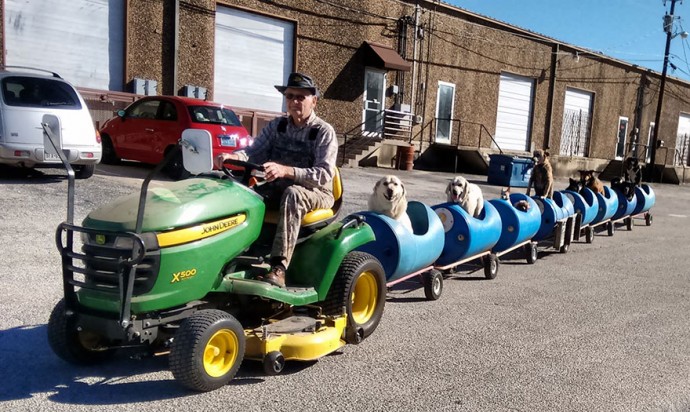 Bostick is a skilled welder, and creating the dog train was something he could easily pull off. The ride takes approximately 1 hour and 30 minutes and the dogs are quite happy just sight-seeing.

After retiring, Bostick and his family have dedicated their lives taking care of pets dumped in their 3-acre land. They have several dogs under their care and several other animals. Bostick never planned to become a dog train driver, but he says it’s a fulfilling thing to do, and it is something that keeps him going.