Thanks to Nicki Coertze, we can now all enjoy seeing a rare pink elephant!When Nicki Coertze, a professional wildlife photographer, visited the Kruger National Park in South Africa, he spotted a rare pink elephant calf standing out from the herd of African gray elephants.Thrilled at the unusual site, he quickly took the pictures that have now been shared around the world.

Fortunately for us he did because a pink elephant is not something you get to see every day.According to scientists, the pink skin may be due to a condition called Leucism. According to Webster’s dictionary, Leucism is:“An abnormal condition of reduced pigmentation affecting various animals (such as birds, mammals, and reptiles) that is marked by overall pale color or patches of reduced coloring and is caused by a genetic mutation which inhibits melanin and other pigments from being deposited in feathers, hair, or skin.”

Leucism is only a partial loss of color, which led to the unusual pink pigmentation. Animals with Leucism are not albinos because they still have some pigment and can often be differentiated by their eyes. 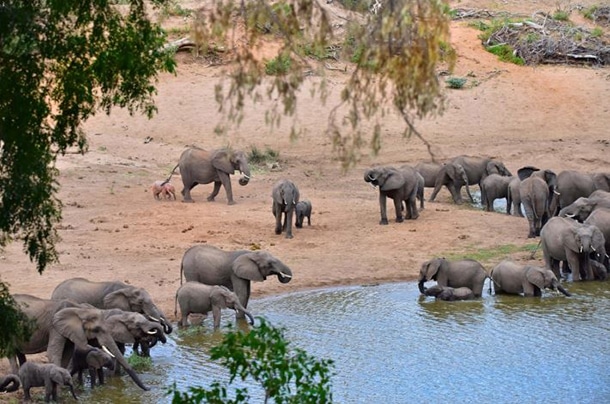 Coertze first spotted the pink calf by a watering hole with his mother and the rest of his family. Unfortunately, animals with Leucism are an easier target for predators because they stand apart from their surroundings. Lucky for this pink baby, he has a lot of big protectors around him.

A Kruger Park large herbivore wildlife specialist, Dr. Ian Whyte, told a South African news organization that it is possible that pink elephants may be more common that we think because many don’t survive. 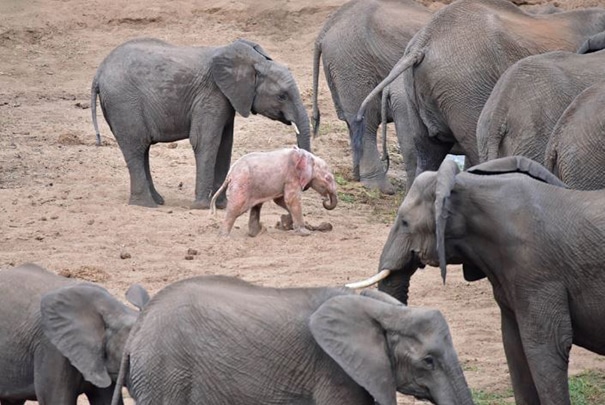 He also said that it is not 100% clear if the calf is a leucistic or a true white elephant, also known as an albino. Since a leucistic will have the dark eyes and a true albino will have pink eyes, time will tell.

By all accounts the adorable pink baby is fitting in well with his family, which is not always the case for special animals that sometimes will get cast out for being different and drawing unwanted attention to the herd.

We wish this little pink elephant all the best and a long healthy life. 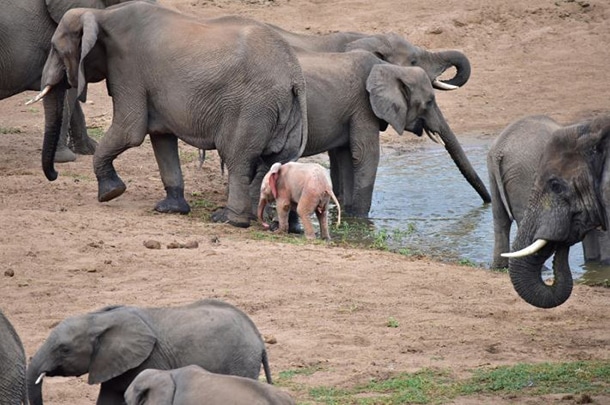 Mom Couldn’t Find The Dog In The Bedroom, But He Was In There The Whole Time This Dog Takes Herself to the Dog Park every day