There are images that will fill your soul with joy …A family dog is one of the most effective ways to boost the emotional intelligence of a child. Raising a baby together with a puppy has a lot of advantages.This has been found to reduce meltdown, aggression, and anxiety in the newborn, to boost its cognitive skills and compassion, and to stimulate the willingness to try new things and to face numerous challenges.

The four-legged companion provides a sense of security and boosts the baby’s social interaction. Many studies have confirmed that a dog in the house can help parents raise a smarter, more empathetic, and possibly healthier, child.Some scientists explain that having a pet at home can increase babies’ beneficial gut microbes, and thus can lower the risk of allergies and obesity.

Mother-to-be, Paige Knudtson, from Richmond, Virginia, was well aware of these benefits. Soon after she found out she was pregnant with Finn, she adopted a boxer at the age of 2, named Brutus, from a local shelter.As she grew up with boxers, she already knew they can be very gentle, but she never expected that the dog will become a huge part of her baby’s life. 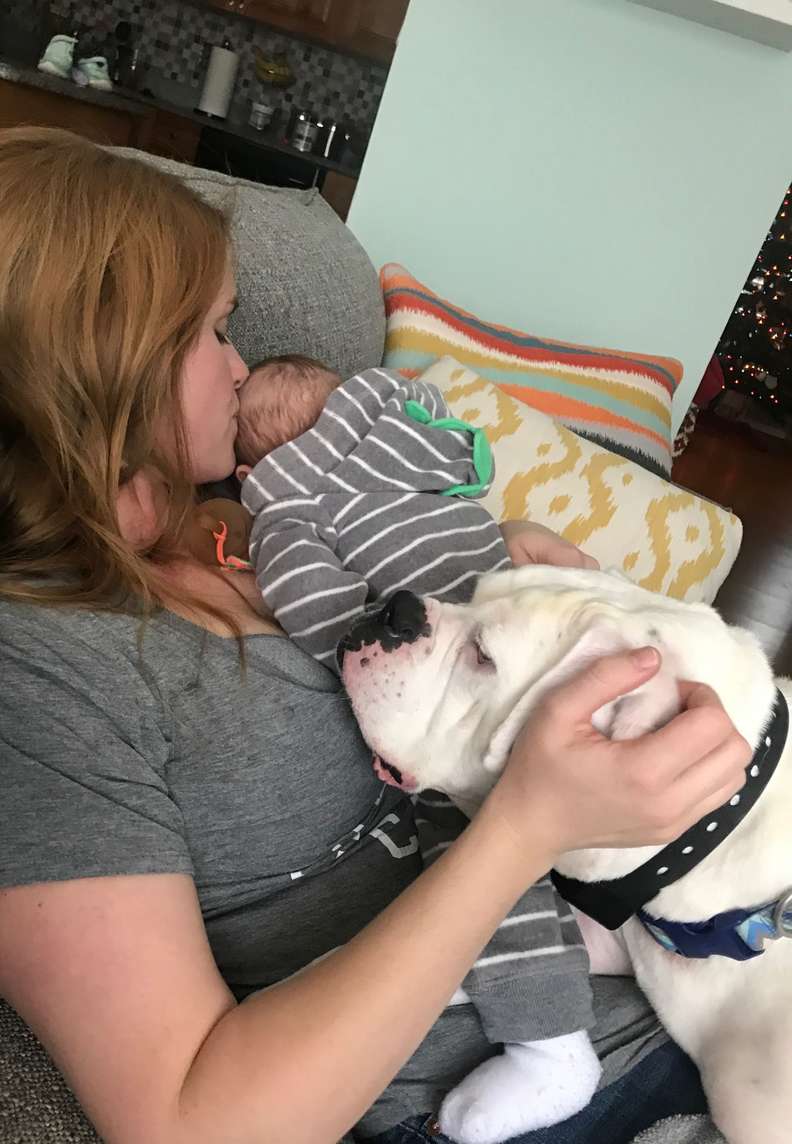 She explained that Brutus is like a big teddy bear, he loves attention and cuddling.

When she was 20 weeks pregnant with Finn, she took an anatomy scan that revealed a serious heart anomaly in the baby. 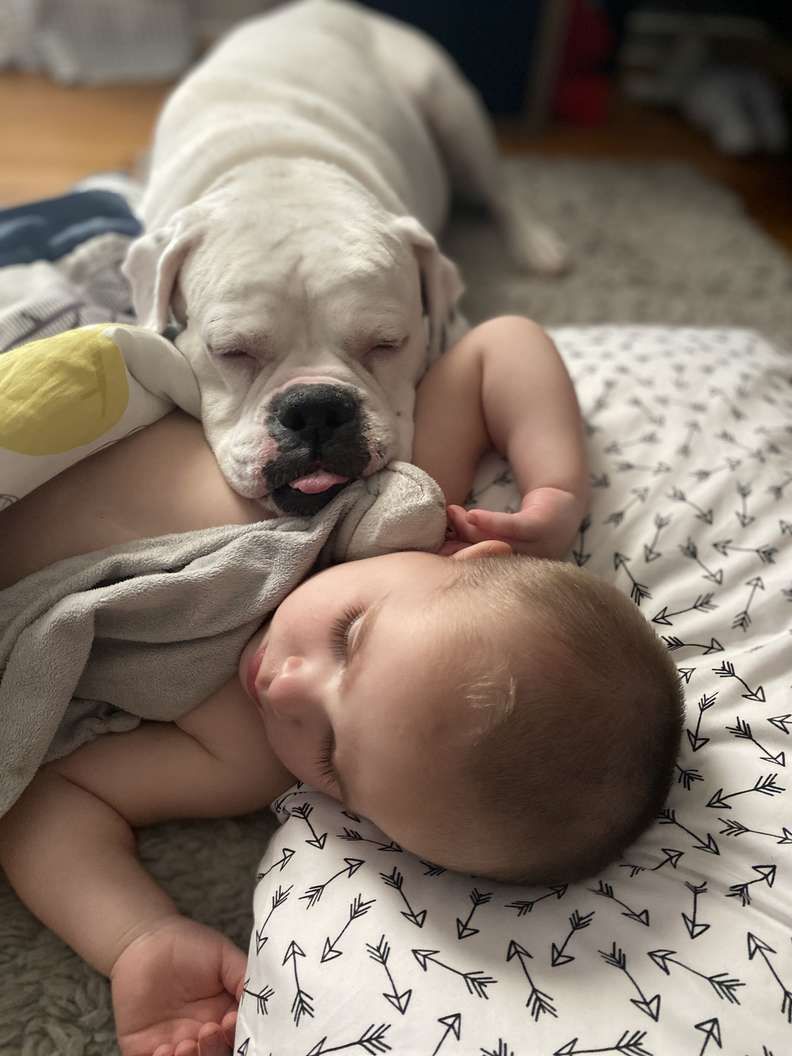 Finn had to undergo multiple procedures right after his birth until he could have an open-heart surgery. Knudson said that they were fortunate to find out about it before his birth, as otherwise, he would not survive.

After seven weeks, and a few complications, Finn was finally released from the hospital and could go home.

Then, as soon as Brutus met him, they had an instant connection.

Paige, who’s an emergency room nurse, explained that it was as Brutus knew that Finn needed extra attention and love, and ever since, he is always by his side. 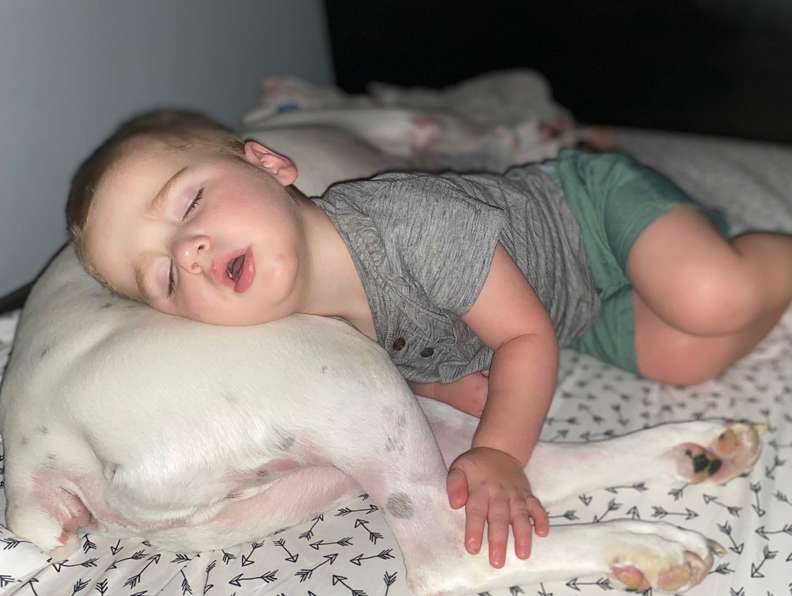 The two are very fond of each other and enjoy every moment together, watching TV, napping, eating and playing outside.

“Brutus often curls up wherever Finn is sitting and follows him from room to room in our house.

If Finn is sick, Brutus knows it and just stays right by Finn’s side or lays his head on Finn’s chest.”

Brutus hates to be separated from Finn, even for a little while, and keeps scratching at the door to Finn’s room or pacing outside until they let him in.

The two of them hate not being together even during the night. 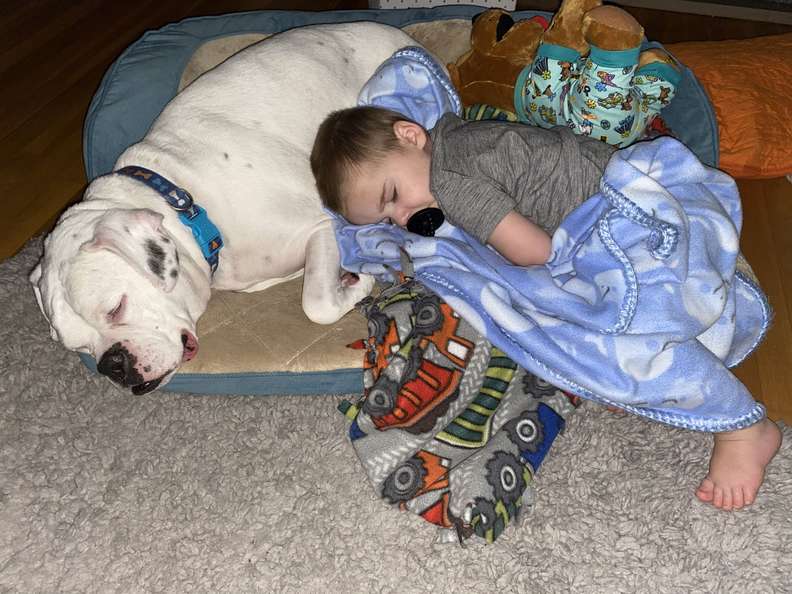 When the boy was a baby, Brutus protectively slept on the rug in front of the crib, but things got easier when Finn has moved to a toddler bed.

Paige said that just over a month after Finn started sleeping in his ”big boy bed”, Brutus started crawling up and sleeping in Finn’s bed every night. It looked like he laid beside him to prevent him from falling out of the bed.

The 4-year-old boxer follows Finn wherever he goes, even if it means that they will be less comfortable.

Paige explained that Finn then started climbing out of his bed and sleeping on the floor, and Brutus followed suit- he began sleeping next to him there.

Now that they moved the dog bed into Finn’s room, Finn would rather sleep in Brutus’ bed along with him, than staying in his own bed.

When she first found her son huddled next to Brutus, Paige was intrigued to know how it had happened and put up a nanny camera.

The camera helped her capture their sweet nighttime routine! The adorable video shows Finn settling in with Brutus for 5 minutes, while his four-legged friend barely moved.

Now, if Brutus is sleeping on the floor, Finn will grab his blanket and climb out of bed, to be next to his best friend. This sweet dog does not mind being Finn’s pillow, as long as he is comfortable.

Knudtson is very happy that their dog has become their 23-month-old son’s guardian and best friend, and they all love seeing them growing up together.

Every morning, the family expects to find them sleeping together, curled up.

“Finn sleeps with Brutus all night, every night. Whether it’s in the dog bed, Finn’s bed, or the floor — the two always sleep together.”