Introducing your dogs, cats, and pets to your newborn baby is a very nerve-wracking experience. Parents want their pets and their children to form the perfect bond – they want them to become best friends! – but it’s hard to predict if that will happen or not. The outcome isn’t always within their control, but for this particular family, something incredible emerged.

Chris Cardinal and his wife could not have had a better experience.Their Golden Retrievers, Colby and Bleu, did not only fall in love with their new sister, Chloe, they have turned her into their own personal partner in crime!Colby is not a stranger to getting caught red-handed by video footage. Before Chloe was born, Colby had learned how to open a closed door on all on her own.

Colby and Bleu had been kept in their room with a video camera left on to watch them. Colby had been caught opening the bathroom door on her own and it did not take long for Bleu to follow Colby into the newly opened room! 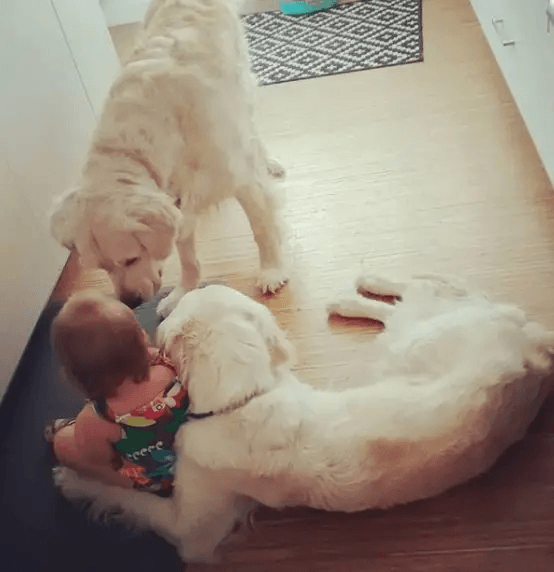 When it comes to food though, Colby and Bleu, are complete animals, pardon the pun! Colby and Bleu had fallen in love with Chloe while she was still very young, but when they realized she could not only give them affection but could be their new access to food, their love became deeper.

It was unintentional on Chloe’s part, but she earned their love by dropping food from her highchair. 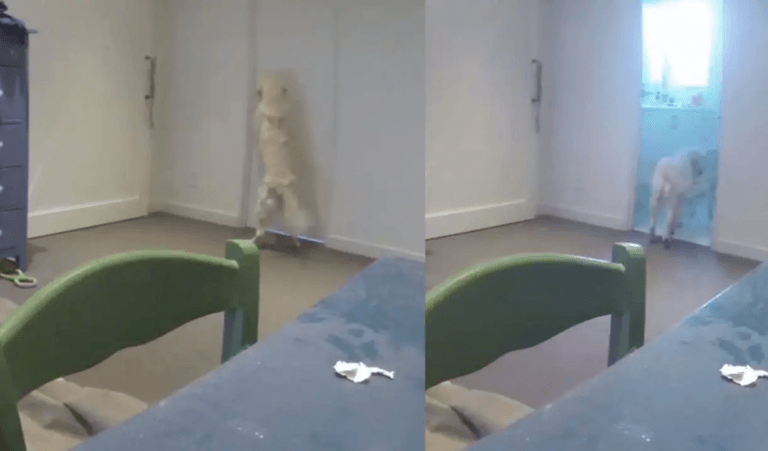 What they found on the other side of the door that morning was different, their 15-month old daughter walking around with their two dogs!
Cardinal explains, “I think they figured they’d try the baby. They’ve snuck into her room before overnight once, but not for breakfast. (At the time, she wasn’t walking yet.) So, this is the first time it effected a prison break.” 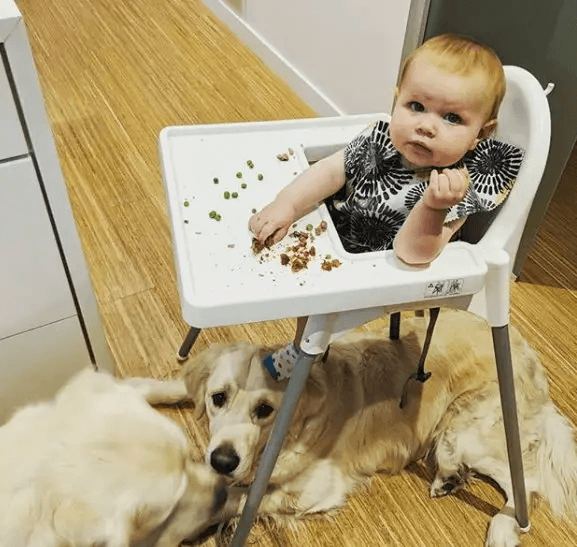 Chloe’s door had been closed the night before and she is not big enough to open the door herself yet, so these parents were shocked! It was time to check the video footage to find out the real story. It had all started at 6:05 a.m. with a quietly sleeping Chloe with a shut door.

It was only a few minutes later before the parents had found the culprits. Chloe and her sidekick Bleu, opening the door and running straight to their food hero!

These dogs run straight to Chloe and wake her up, who is more than happy to be woken up so suddenly! They give her all the love with kisses before running out of the room again, hoping she will follow. They did break in her room for a reason after all! She is still waking up and does not follow but stares out her door to where they ran off. This is her idea of a perfect morning.

It only takes a second for Colby and Bleu to run back in and try to convince her to follow again!

This time Chloe gets the message and gets out of her bed. She is not going to be left behind by her best friends! She waddles right out the door and also the vision of the camera. There is no doubt that she went and gave Chloe and Bleu any treats that she had access too!
Cardinal wants to make sure everyone knows that Colby and Bleu, “definitely knew what they were doing.”

These three are the cutest three partners-in-crime to have ever completed a jail break! Watch the full escape video right below.