The idea of sitting down for dinner with a 300lb bear is daunting, for most of us anyway.
This is in fact the norm for a couple from Russia. Meet Svetlana and Yuriy Panteleenko and their domesticated pet bear Stepan from Moscow.

They adopted Stepan 23 years ago when he was just a 3-month-old orphaned cub.
He was found by hunters all alone and in terrible condition, so the couple decided to take him in and give him a home.23 years on, the 200kg, 7-foot brown bear still lives with them and he has grown into a very cute bear.
He loves watching TV with his humans and even helps out around the house by doing tasks like watering plants.

“He loves people and is a sociable bear – despite what people might think, he is not aggressive at all. We have never been bitten by Stepan.” Now, contrary to the myth, he does get through more than a bowl of porridge a day and he does in fact have a sweet tooth, his favorite dish is a can of condensed milk.

He also eats a mammoth amount of food, around 25kg of fish, eggs and vegetables every single day!

But he manages to stay in shape thanks to his love of football, you really couldn’t write this! He also enjoys acting in films and posing in photoshoots. On your head: The couple said the bear, pictured playing football, is sociable, has never bittne them and likes nothing more than a hug
Stepan has a very gentle temperament and often can be found cuddling up with the couple on the sofa.

“Stepan likes nothing more than to cuddle up with us on the sofa at night while we’re watching television.” “When we adopted him, he was only three months old and had been found by hunters in the forest having lost his mother. He was in very bad condition”

“He absolutely loves people and is a really sociable bear – despite what people might think, he is not aggressive at all. We have never been bitten by Stepan.” “He’s got so many talents and loves a picnic. It’s a wonder he doesn’t eat us out of house and home.’” 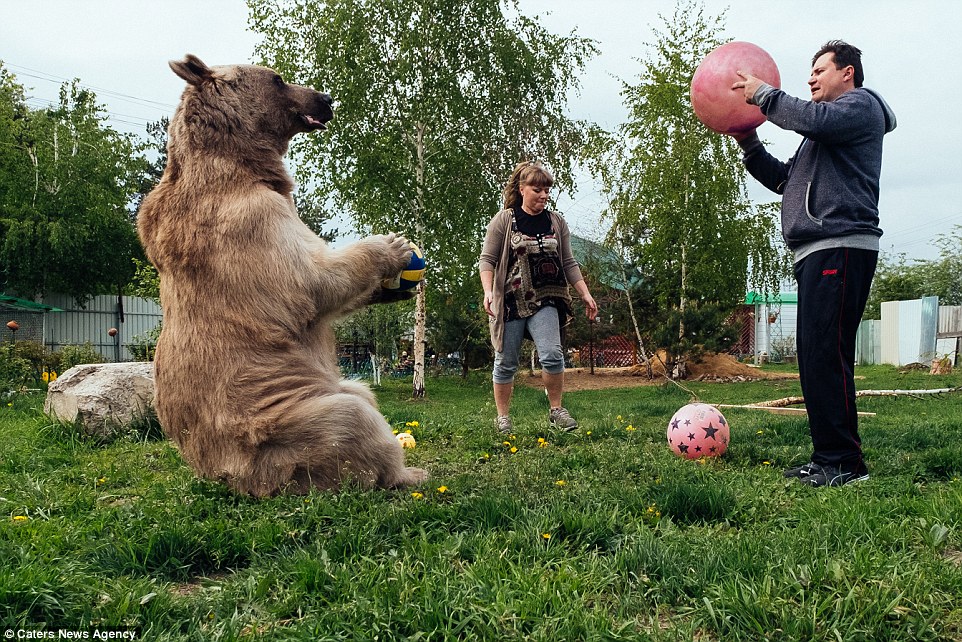