Dogs are our best friends. They do everything to give company to their human. But when the dog is getting old, it is our responsibility to look after them. It is our duty to give them company. We should make sure to make their life easy and comfortable.Some people go an extra length for their dog and sets a good example for the people. Here is an incident where a family has arranged their sleeping schedule for their old dog in order to make sure that he felt loved. The name of the dog is Spike.

He is a 14-year-old English springer spaniel. Due to his old age, he can not move around like he used to be. Recently the dog suffered another stroke, which made it difficult for the dog to climb the stairs.Due to this limitation of not able to climb the stairs, he can not do his favorite activity of sleeping with his parents in bed. This activity the dog has done since he was a pup.

At first, they closed the stair gate to stop him from coming up but as Spike was used to sleeping in the bed, he whined for some time, and then in the dark with great difficulty he jumped over the gate to reach his parents’ room.

As their bedroom was on the second floor, it was difficult to reach there for Spike as he grew very weak. But in that state also, he kept on trying and at last, they have to block the stairs in order to stop him from trying. But it was not the best solution. 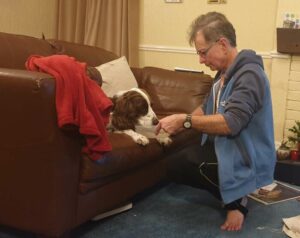 Soon they came with an adorable solution. The solution was that if Spike could not come upstairs, his parents could come downstairs to give him the company. So now on the rotation basis, the family members had a pull-out couch and spend the night with their dog so that he won’t feel alone.

Though Spike is no longer the youngest pup yet there is something that has not changed, his parents’ love for him. With this act, they have proved one thing that they could do anything for their beloved dog. 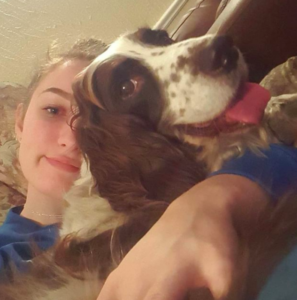 Everyone likes a dog but a true parents always support the dog in his last time and it will be the best gift for any dog. Please answer in a comment will you also do the same for your dog in his last moment. It really makes our day bright when we hear this kind of beautiful story. Family’s Cat Hides In A Pile Of Toys, And People Have A Hard Time Spotting Him