A senior dog who can no longer make it up the stairs is always joined by his dad at night and the sweet story has taken the internet by storm for obvious reasons… It’s just too adorable!Have a look for yourselves…One old dog has stolen the spotlight this week…And it’s for the most adorable reason. And we just can’t get enough of him…

And obviously, neither can you guys… Because it’s safe to say that dogs are one of the world’s most popular pets!These lovable and loyal companions make the perfect household pets, and it also helps that they’re so damn cute. They truly are man, and woman’s, best friend.

Whether they’re causing mischief, giving us those puppy eyes when they want a treat, or taking up the entire sofa, many of us couldn’t live without our 4-legged companions. And these pooches are pretty much what unites the internet.

There’s one thing it seems we can all agree on – our canine pals are too good for this world. But, dogs don’t just provide us with a cuteness fix..

They also make for some pretty heartwarming content too. This week has been no exception to that…

Because the next pooch you’re about to meet will really brighten up your day.

Spike is a rather clingy fellow – especially at nighttime. “The first night we had him, we closed the stair gate and went to bed.”

“He whined for a couple of minutes before jumping over the gate in the dark and trotting up into my parents’ room and straight up onto the bed! And that’s where he slept from then on,” owner Catherine Morris told The Dodo. “He loves to snuggle up and tries to push his way under the covers to get as close as possible.” 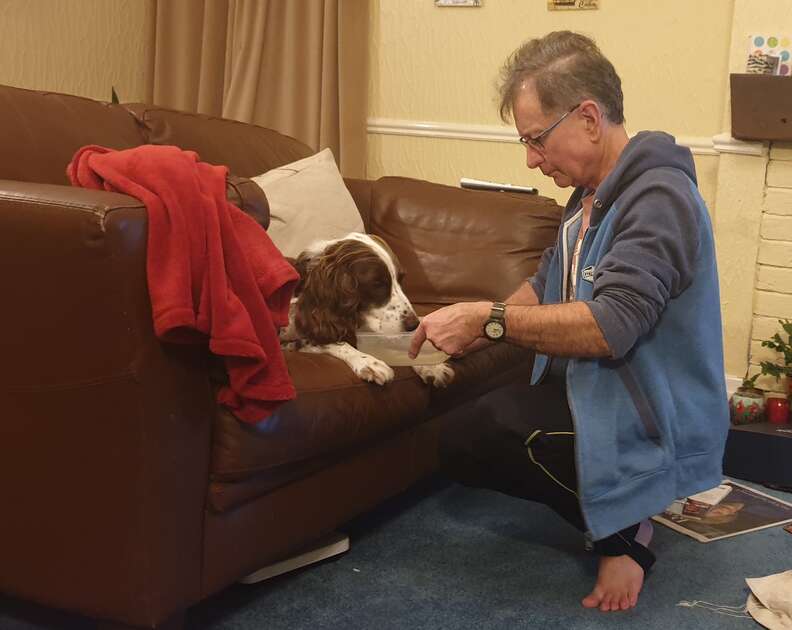 But as Spike has gotten older and suffered some minor health complications, getting upstairs to the bed has become more and more tricky for the pooch. Although that doesn’t mean he doesn’t want some company!

So now, when Spike sleeps downstairs on the sofa, he has a partner with him – his dad. “This new schedule started while I was away at university, so my parents spent alternate nights downstairs with Spike.” Lost Dog Found Playing With Goat and Dog, All 3 Hop Into Truck For a Ride Home After 500 Days, Bonita Finally Gets To Leave The Shelter