Dino and his mother, Sookie, were taken to the shelter and placed in the same kennel together. He was scared of everything, but thankfully his mom was by his side. The dog was always seen cuddled up next to her. They were inseparable.The two were picked up as strays in Monroeville, Alabama, and taken to the busy shelter after being seen roaming the streets together.

The dogs were starving and needed to be rescued before they got hurt.Dino’s behavior is indicative of a mother-and-son relationship.“He’s much younger, and he doesn’t act like a dog who’s a mate — he acts like a dog who’s a child,” Edi Kelley, director of Paws Crossed Dog Rescue, told The Dodo.

“He leans into her, and tucks his head underneath hers. He will not let her out of his sight, and he has to be touching her. If he is not physically touching her in some way, he is very stressed.” They also noticed Sookie was pregnant and ready to have her pups anytime. So at night, the rescuers started separating Dino from his mother for safety reasons. And it didn’t go well. The sweet boy would howl and cry missing his mom every second he wasn’t with her.

While Dino is scared and hesitant of people, Sookie is much more socialized leading rescuers to believe she has had contact with humans before. Dino is skittish and hides anytime someone comes around. 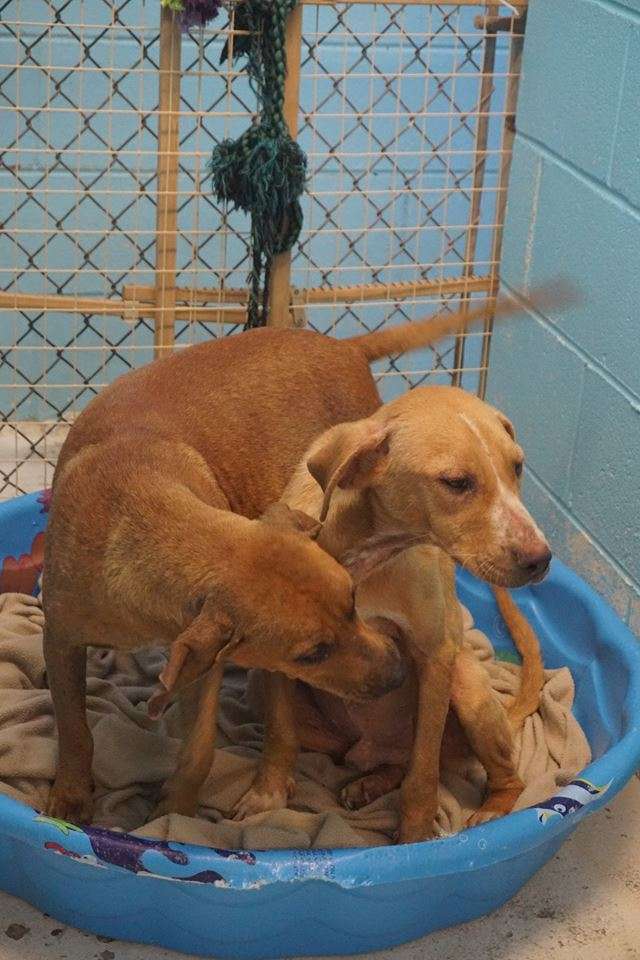 But the day finally came when Sookie and Dino were placed in a foster home together within the Paws Crossed Dog Rescue network. And Sookie ended up giving birth to 10 puppies! Foster care will keep this family together until the puppies are about four weeks old. The rescue group will then start looking for forever homes for the pups with the hope that someone adopts Dino and Sookie together. In the meantime, the fosters will work closely with Dino to help him become more accustomed to being around people. This will definitely help with their wish of the two dogs finding a home together. If you’re interested in adopting Sookie and Dino or any of the puppies, contact Paws Crossed Dog Rescue.