“He’s actually never met another cat or kitten, so I think he assumes he’s a dog.”If you met Taryn and Jenna Choquette, you’d know they like to say they have two dogs – Brady and Tuukka.But in reality, Brady is the only real dog in the family. Tuukka is actually a cat, even though he doesn’t seem to know it himself.“We always joke that Tuukka is more like Brady – more of a dog than a cat,” Taryn told The Dodo. “So we just call them ‘the dogs.’”

They found Tuukka, the cat-dog hanging onto some branches on a tree near Austin, Texas.“A friend of a friend found him in the tree and took him home, and she fostered him for a couple days,” Taryn said. “And then we were like, ‘We need him. He’s adorable.’”When Taryn brought Tuukka home, he was about a month old and weight “about a pound.”

The stray kitten was scared of everything and everyone, especially Brady. 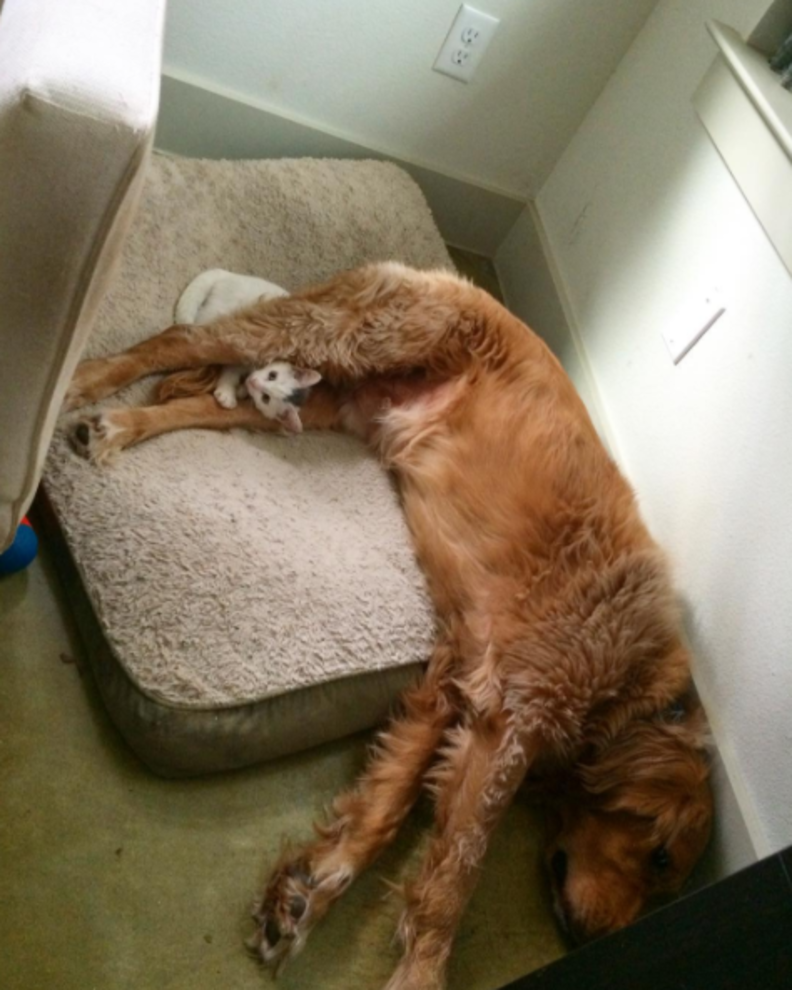 To help the poor kitten to adapt to his new environment, the Choquettes kept him in his own separate room, fitted with a sliding glass door. But Brady, waited by the door every day until Tuukka liked him.

“Brady loves all creatures great and small,” Taryn said. “He wants everyone and everything to be his best friend.”

Tuukka got a little braver as each day went on and moved a little closer to the glass. Around a week later, the Choquettes decided to finally introduce the two new siblings to each other. 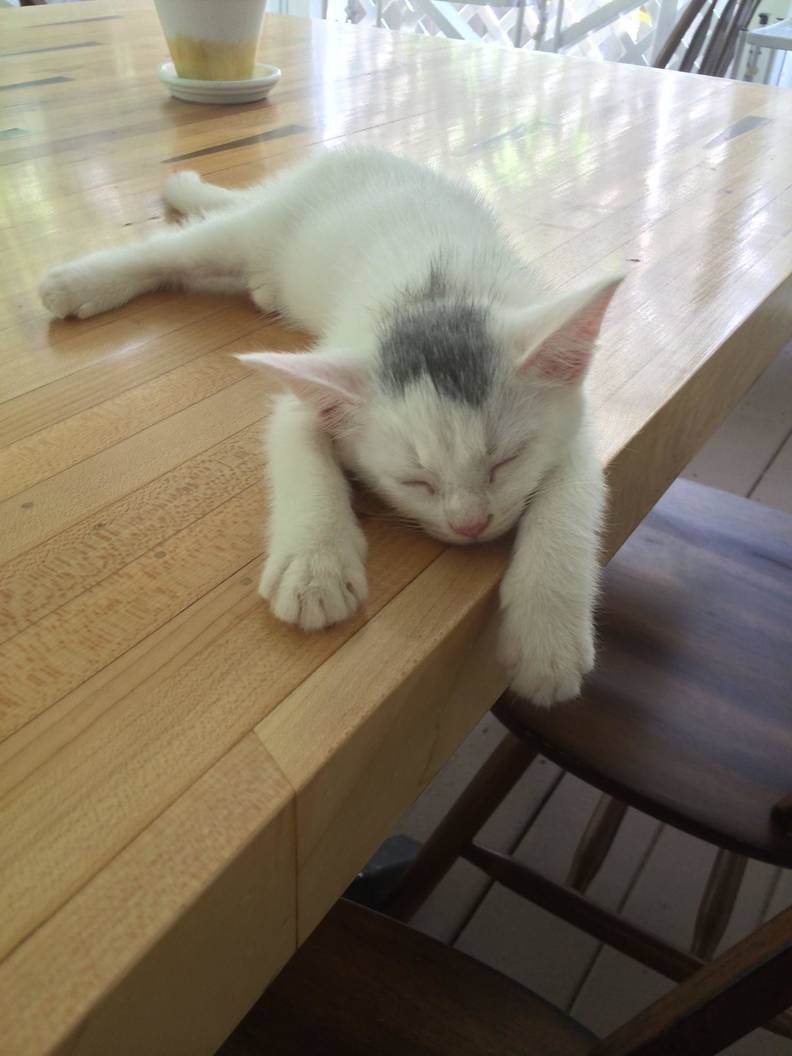 Their first interaction was a nose bop. Tuukka tiptoed up to Brady, and touched his little wet nose against Brady’s large snout. Then he did it again, and again.

Not soon after, the pair became inseparable and Brady happily and gracefully took on the ‘mommy’ role. Apparently, Tuukka didn’t even mind when Brady tried to nurse. 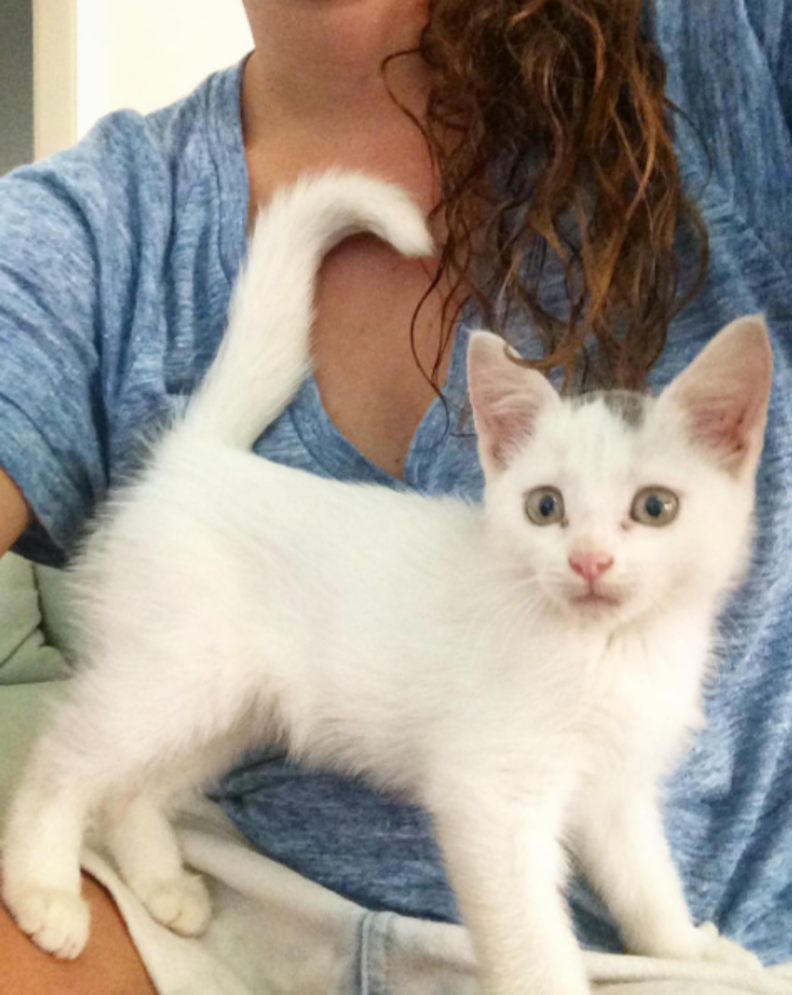 “Since Tuukka was so young, he wasn’t actually fully weaned when he got lost, so he started to suckle on Brady,” Choquette said. “It was the cutest thing ever.”

Brady, being the momma figure, also teaching Tuukka things, even though these were more focused on how to be a dog rather than a cat. 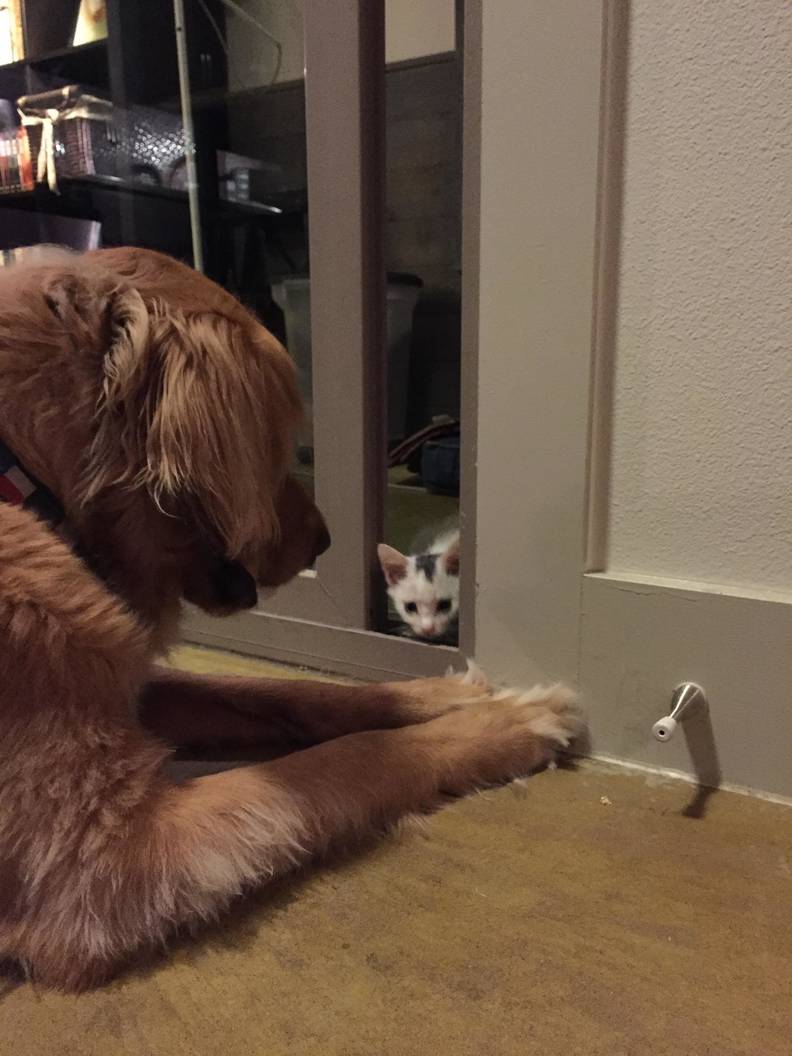 And to this day, Tuukka will still not drink out of a tiny cat bowl – he only drinks out of Brady’s giant water bowl.”

Brady even taught Tuukka to go out to the garden and taught him to eat grass and to beg for food.
“As soon as we have food, both ‘pups’ are right there trying to get a taste,” Choquette said.

Another thing the pair love to do is roughhousing. 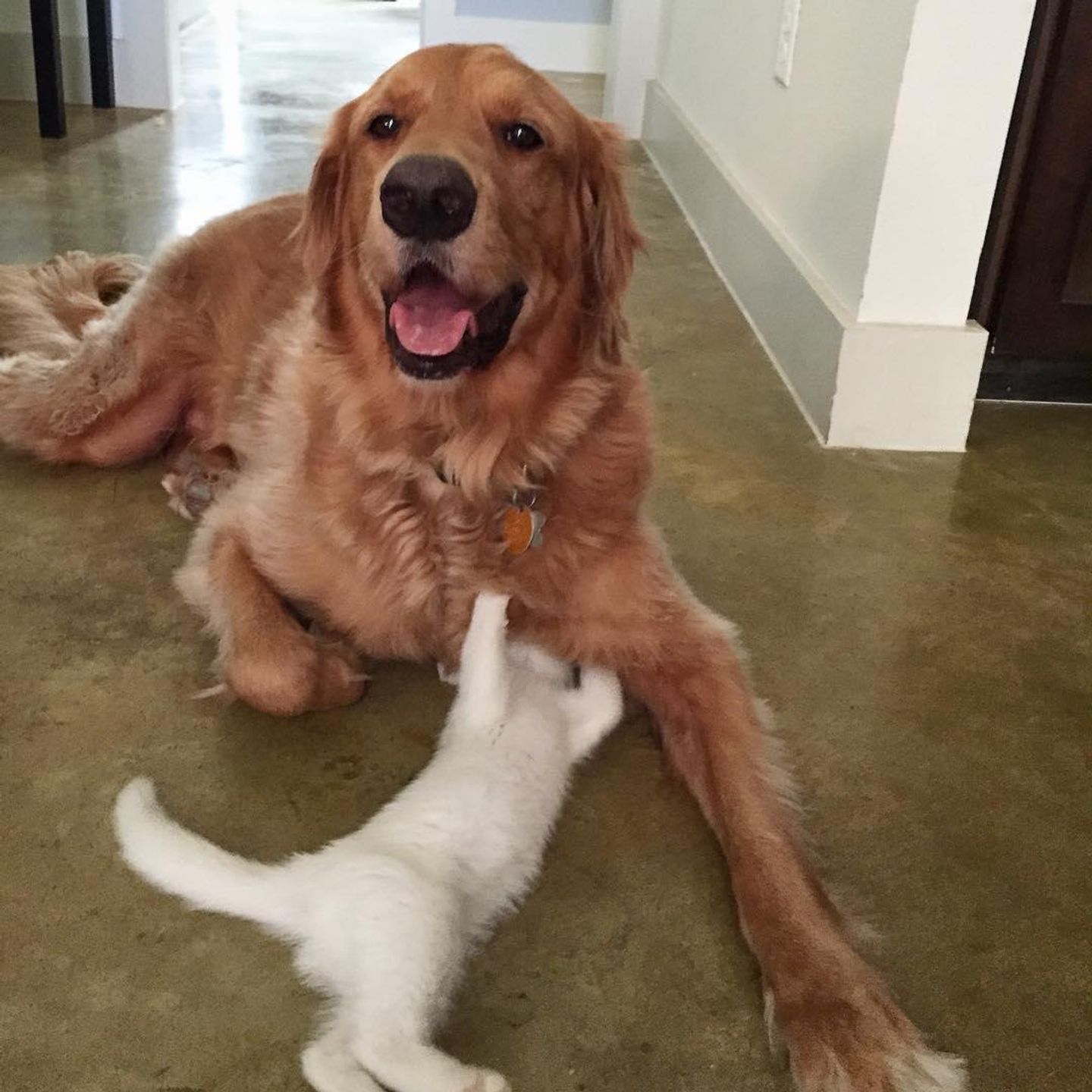 “Every morning when I get ready for work, they chase each other around the house,” Choquette said. “Tuukka likes to launch off to wall to get a head start, and Brady is kind of giant and cumbersome, and he’ll chase him around. And they’ll jump on the bed and wrestle forever.”

“They’ll always do it late at night when I’m trying to sleep, or wake me up in the morning.”

They make a great pair of mischief. They work together to cause mayhem, for example, Tuukka will knock food off the kitchen counter and brady will be waiting below to eat it. This has happened too many times to count. 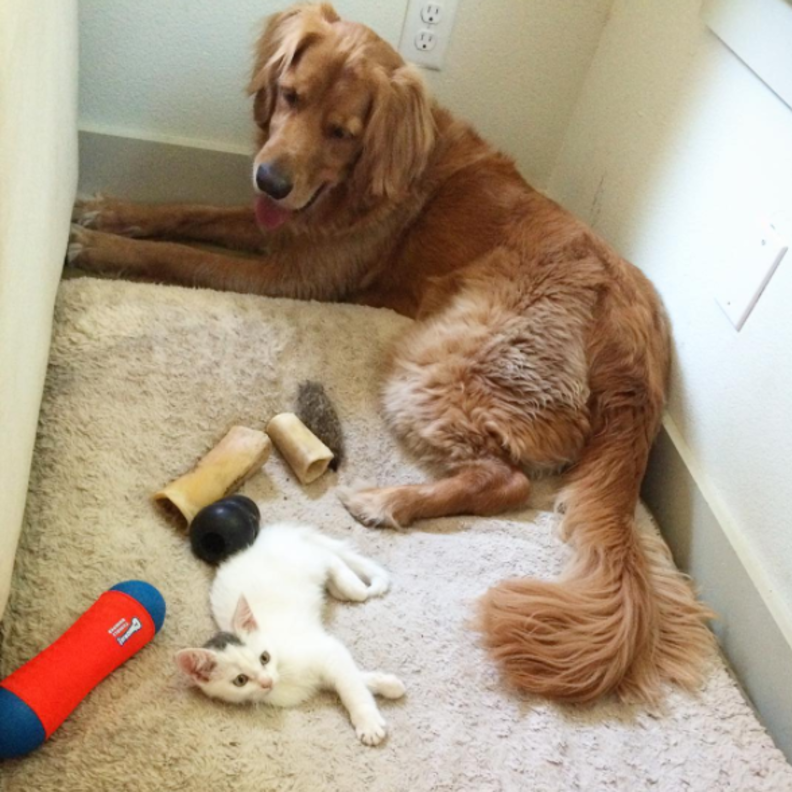 “They’re in cahoots, that’s like the exact definition of them.”

Tuukka loves playing with Brady so much so that he will get jealous when Brady is playing with the families friend’s dog, Wyatt, he even tries to scare him off. 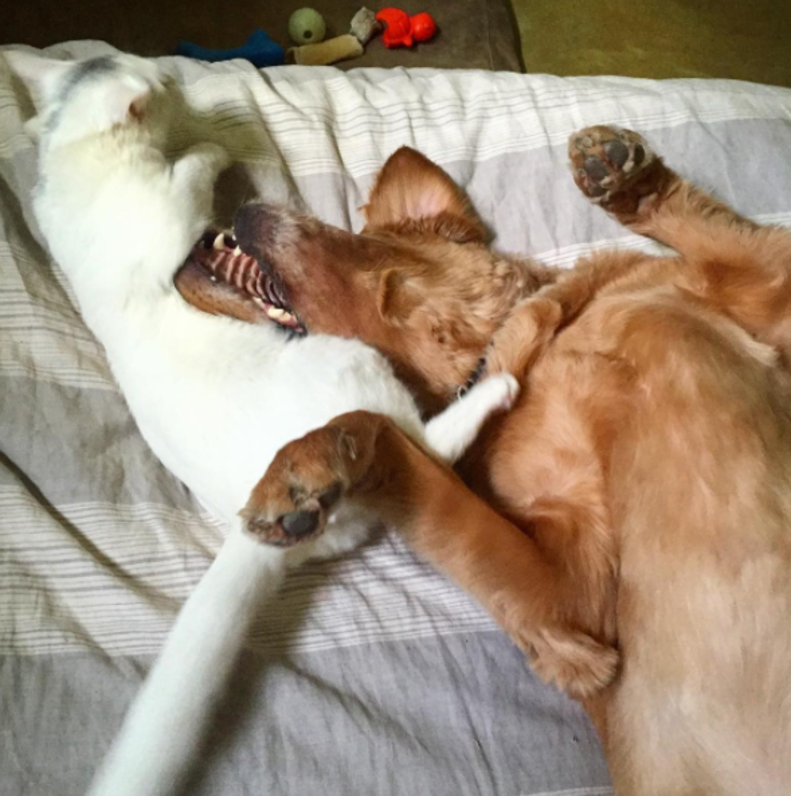 “Tuukka is very protective of Brady, he growls like a dog, and he actually sounds like a dog – it’s so funny.”

Tuukka tends to do nothing but mope around when Brady is gone for the day. And when Brady comes back, Tuukka glues himself to him.
“Whenever we come back, Brady lies down and Tuukka sniffs all around, like ‘Tell me where you’ve been. Tell me all the things that you’ve done,’” Choquette said. 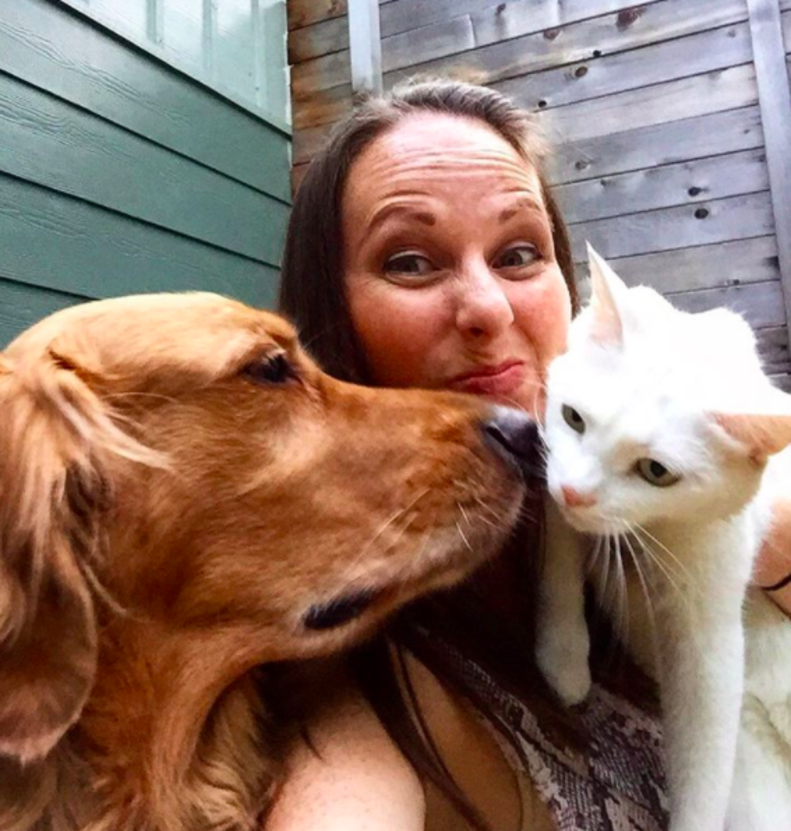 Whatever Tuukka believes he actually is, he’s most definitely happier with his bestie Brady around. 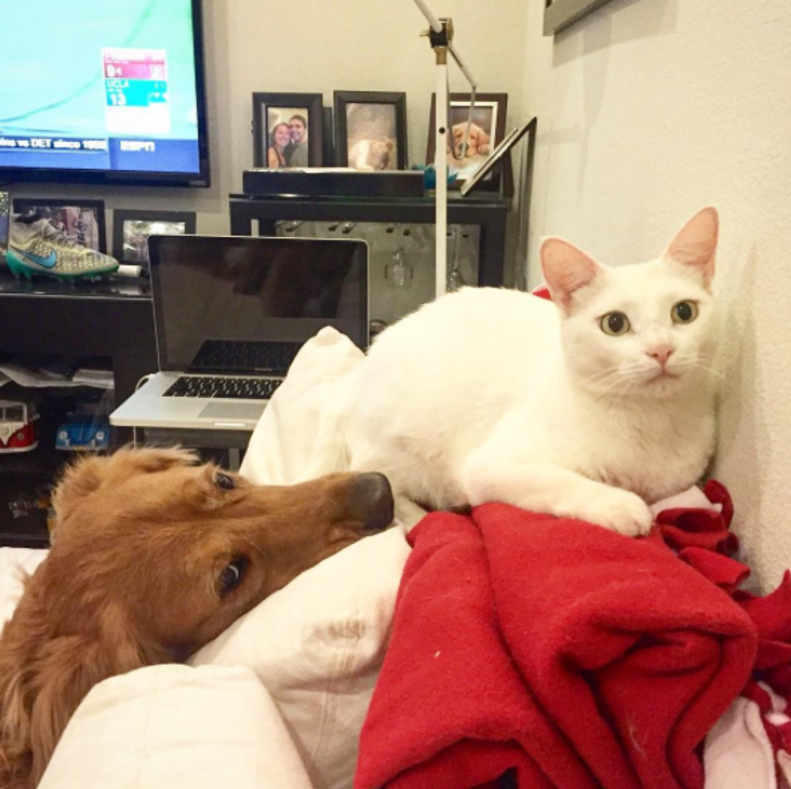