What started as a relaxing Sunday stroll by the shore turned into a nightmare when one family’s beloved dog was suddenly swept away by the sea.In Cummingston, Scotland, the dog owners were on a walk with their Cockapoo when he got caught in a current, which pulled him further and further from the coast. His panicked parents called the Maritime & Coastguard Agency, who thankfully, were training that same morning and ready to spring into action.

One of their helicopters was already in flight, and immediately started searching for the pooch. It wasn’t long before they found the small brown Cockapoo struggling to keep his head above water, and sent a boat out to rescue him.From the time he got swept away to the time he was rescued, the poor pup had been treading in the frigid waters for 40 minutes and was about 50 meters from shore, according to the Dodo.

Sam Sinclair, a press officer for the UK Coastguard, said in the story:

“The dog was absolutely exhausted when pulled on board the vessel, very tired, wet and cold. The lifeboat crew thought [he] wouldn’t have survived much longer in the sea.” 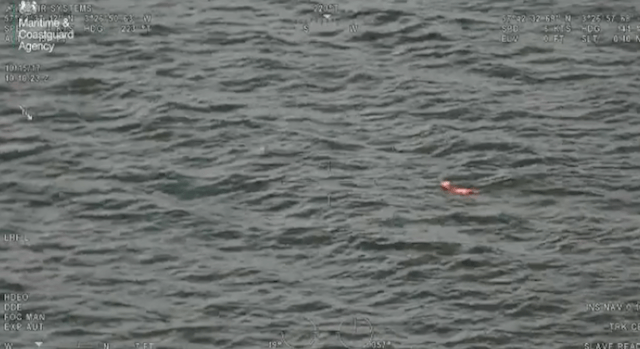 The Dodo reports that the rescue team performed first aid procedures, and miraculously, he was alright. A later visit to the veterinarian confirmed that he was unharmed.

“The owners were completely overjoyed to have the dog returned to them safe and well,” Sinclair said in the story.

The Maritime & Coastguard Agency posted about the rescue online, adding this bit of advice:

“Remember to never try and self rescue your dog if it gets into difficulty on the coast… Always call 999 and ask for the Coastguard who are trained in all types of rescue including dog rescues.”

It’s also a great reminder to keep dogs leashed for their own safety, especially when near cliffs and coastlines with rough waters.