Carol Jordan adopted Bear and Bull six years ago and from day 1, the Black Lab mixes have been known for their mischievous antics!The littermate brothers have done everything from pulling down drain pipes and chewing on doorjambs, to destroying three lawn mowers. THREE of them. They must really hate well manicured grass.

They are also apparently preparing for WW3 with all of the fox holes they’ve dug in their Smithfield, Virginia, home’s yard. Luckily, their mom loves them no matter what the crazy pups do.“They just can’t help themselves,” Jordan said. “We never catch them in the act, we just see the destruction afterward.”

Their latest bit of trouble started when an unsuspecting mail carrier was a target of a masterful heist.

“When delivery folks come up, they just leave their doors open and hop out to deliver,” Jordan said. “The boys (as we call them) will take any chance to jump into a vehicle.”

When the postal worker returned to her truck, she found Bear and Bull scarfing down her lunch! 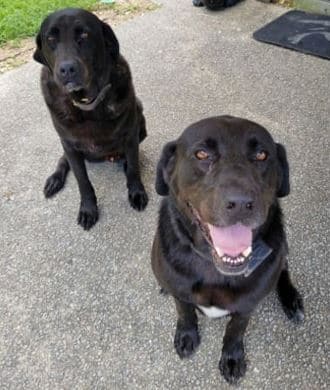 The mail carrier quickly scribbled a note for Jordan:

“Hey! I drove up to deliver a package and both of the dogs crawled in my truck,” the note read. “They got into my lunch and ate an egg and some carrots and pumpkin seeds. I don’t know if that will upset their tummies, just FYI!”

Jordan decided to try and repay the postal worker for her lost lunch (including the carrots, which Bear and Bull didn’t even eat and promptly spit out on the lawn). Jordan and ‘The Boys’ presented the mail carrier with a gift card to replace her lunch and an apology letter.

“It was so nice of her to leave us a note of concern for the dogs that we decided to get her a gift card from ‘The Boys’ to make up for them eating her lunch,” Jordan said. “I brought the note and card to the post office the following week so they could give it to the carrier.” 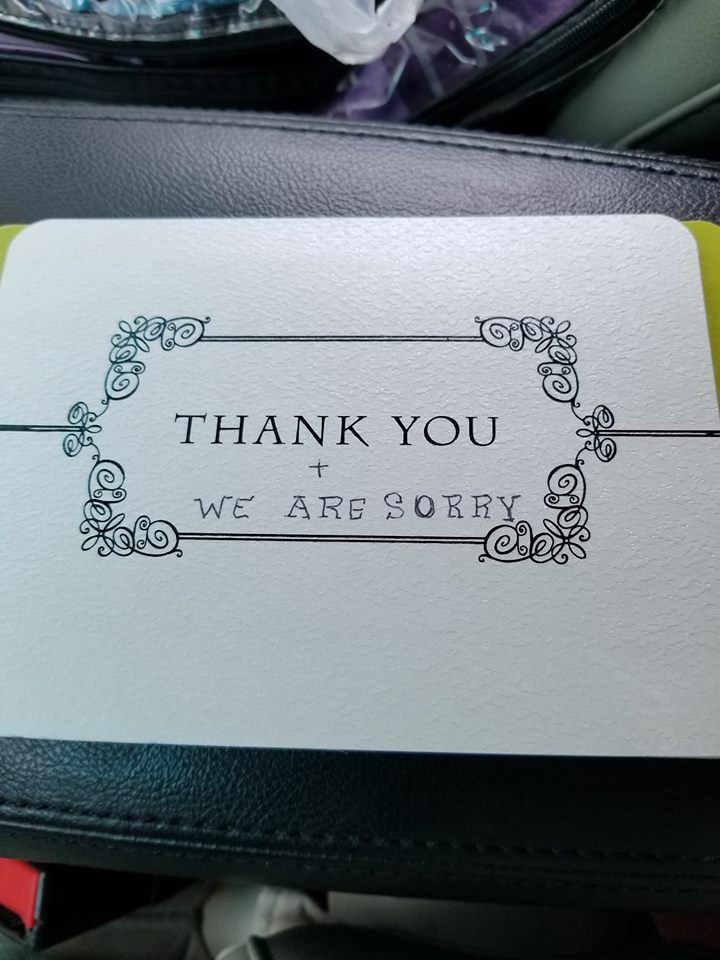 The note read, “Sorry we ate your lunch. Thank you for sharing! P.S. Our humans said, ‘Thank you’ for leaving a note. We didn’t like the note. We got in trouble.”

This isn’t the first time the dogs have gotten into trouble with a courier. One FedEx driver learned the hard way that the two big dogs like car rides. 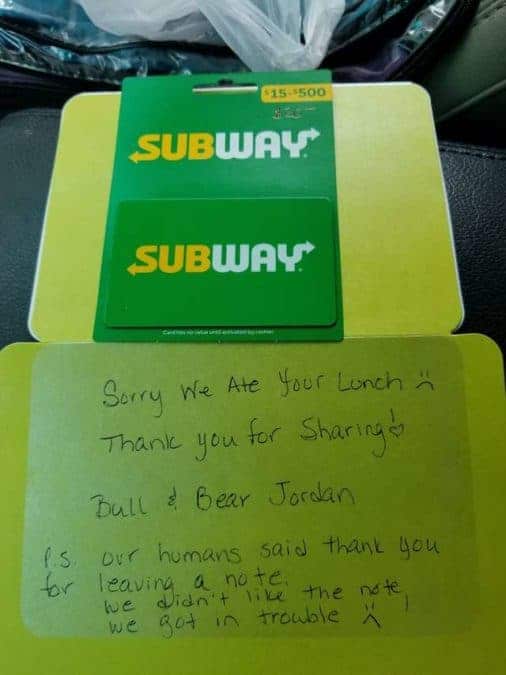 “Our FedEx delivery man told us that he came up to deliver and he left his door open. The boys jumped in and one sat ready to drive and the other ready to be a passenger in the front seat,” Jordan said. “He kept throwing dog biscuits trying to get them to come out — but they wouldn’t.”

Mail carriers on Jordan’s route are in high alert to avoid the duo’s antics and whether or not The Boys are actually sorry is a toss up.

“They don’t really regret anything they do!” Jordan added. “They will look guilty for a while, but then it is all fun and games with them again.”

These dogs are the doggy version of Ocean’s Eleven!