Adding a new puppy to the home is an exciting time for everyone involved. And, when this family brought home their new rescue, Teddy Sugar, their golden retriever was instantly smitten with his new puppy sister.When the tiny bundle of black fur called Teddy Sugar went to live in her new home, she was introduced to her big brother, a Golden Retriever named Pork. She arrived at the home in a brown cardboard box with her pink and peach blankets.

From the moment Teddy Sugar was placed on her pink blanket on the couch, Pork was thrilled that he had a new baby sister. As soon as he met the pup face-to-face, he was beside himself with happiness.Pork does a little dance and jumps up on the couch next to her, greeting her with contained excitement. When she stands up and goes to sniff him, he welcomes her right into his big fluffy heart.

The curly haired puppy, which is no bigger than his head, is also happy with her new big brother. Once on the floor, her tiny tail wags in such excitement, she knocks herself over with it. 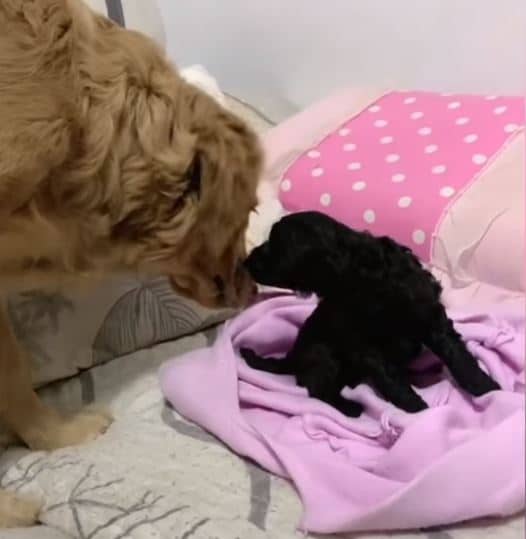 Pork can’t contain his joy and starts doing what could be called mini zoomies, wanting so badly to play with the tiny fluffy puppy. The pup then gets a little bolder and gives her new bro a couple nips on the nose and starts exploring his ears and the fur around his face. 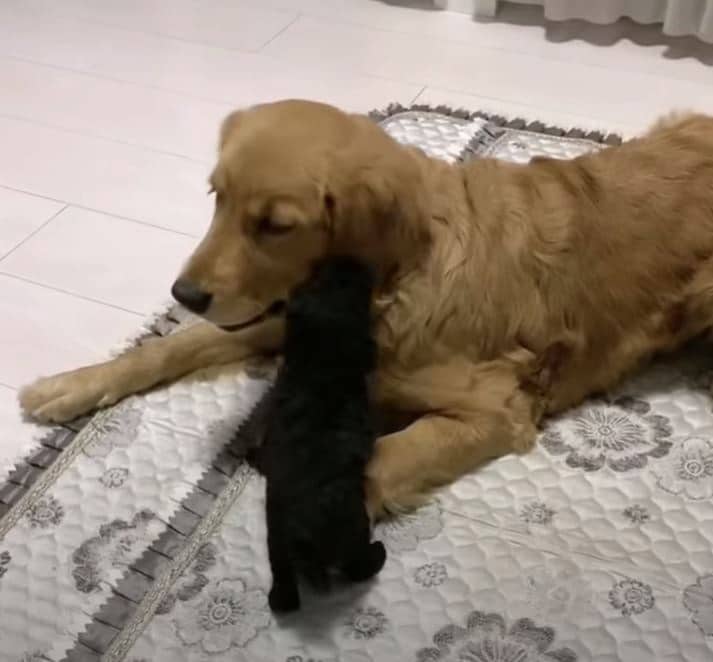 Pork patiently lets little sis do her thing while he munches on a chewy and kicks back for a while. The adorable pup then takes a cruise through the house only to return to her big bro to kick it for a nap.

It truly doesn’t get any cuter than these two.