Everybody has their own opinion about whether dogs should be allowed around babies, but we have plenty of evidence to prove why they should! Dogs are incredibly loving animals, and as long as they’re introduced to their new sibling in the right way, then they can go on to form wonderful bonds with babies.

In case you’re still not convinced, we’ve come across a video of a cute German Shepherd puppy who meets a baby for the first time, and it’s one of the most adorable things we’ve ever seen! Despite probably having never met a dog before, the baby clearly wears the trousers in this instance, and as the little pup tries to chew on her fingers and toes, she’s sure to push him away when she’s had enough!

The video, captioned, “Hi friends! We offer you to watch a new video. Zlata meets a German Shepherd puppy for the first time. Look at the cute baby’s reaction to the puppy,” was posted onto YouTube by Zlata Life and now has over 10.5 million views, and it’s not hard to see why. You can tell that this sweet pair are going to grow up making millions of special memories together, and they already have the best bond! 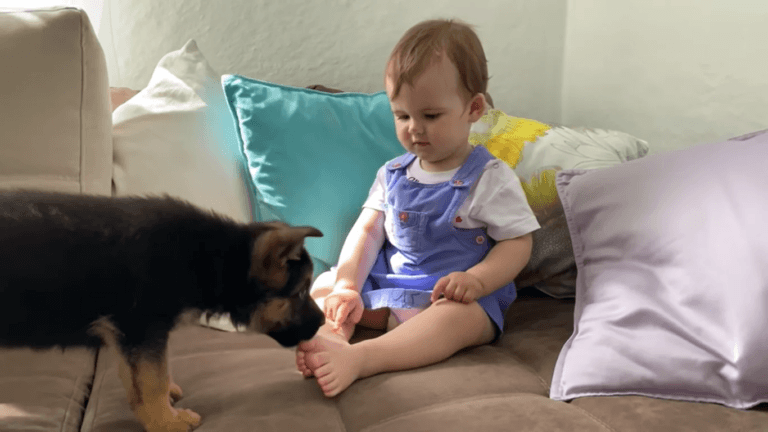 The video begins with Zlata and the dog both sitting on the couch together. They each seem pretty interested in the other, and it’s funny how they show their curiosity in different ways.

The puppy sniffs all over the baby, as if he’s thinking, “hmm, what is this specimen?” while the baby puts an experimental hand onto the puppy’s head. 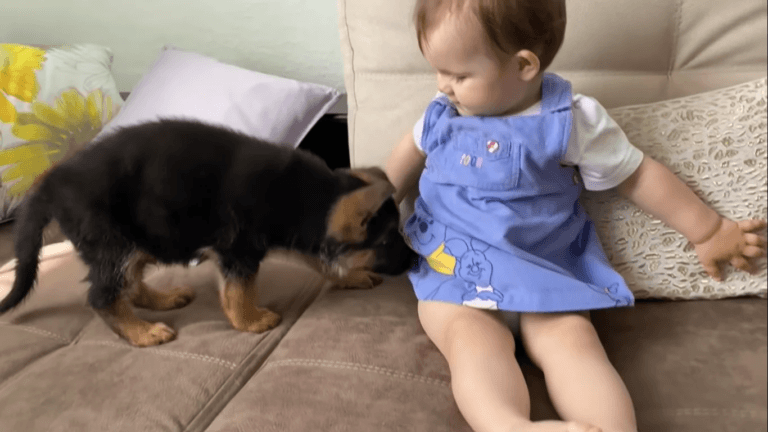 After a few moments, the pair begin to get more confident. The puppy seems to have come to the conclusion that the baby is a giant chew toy, and he gently nibbles on her hands and feet. But Zlata isn’t having this, and the sassy little baby pushes the dog’s head away whenever he’s done a bit too much chewing for her liking. 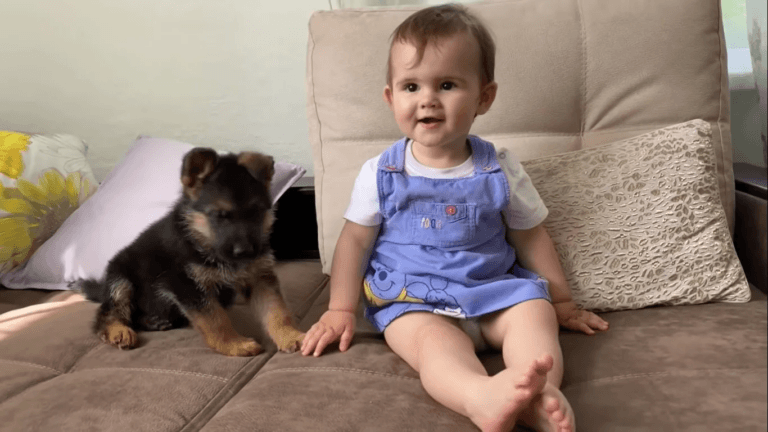 Since being posted onto YouTube, the video has caused quite a stir, as people have mixed opinions on whether the dog should have to chew the baby’s hands and feet. One person said:

“Cute and all but the baby didn’t appreciate much of being a chew toy, was asking for help to the camera guy..I felt a little uncomfortable.”

“Started out really cute and sweet as could be, but when the baby became obviously over it, it was time to stop filming. Was just an aggravation and annoyance to her at that point.”

We have to admit, we found the video absolutely adorable, and to us, it didn’t seem as if the baby was in any danger! What do you think? Dog Is Heartbroken When Little Girl Leaves For School