It’s not easy being the new pet in the house but in this case, it’s not the new kitten that’s being shy, it’s his new older and much bigger brother.When mom and dad decided to add a new kitten to the family, they carefully plan out the first introductions to their cute golden retriever, Bailey. They bring the kitten they’ve named Simon home and carefully carry him over to the couch where Bailey is resting.

Dad sits down with kitty and encourages Bailey to come over to meet Simon but Bailey is having none of it. Rather, he jumps off the couch and shoots dad a look that seems to say, “What on earth have you done?”Hiding behind the arm of the couch, Bailey looks over at dad who is trying to coax him over to make friends with the adorable Simon. Dad pats the couch cushions and Bailey just blinks at him clearly uninterested.

No problem, dad thinks. I’ll just move closer to you….Nope, Bailey moves to the other side of the room and out of sight. Introductions are not going as easy as originally hoped.

Finally Bailey is back on the couch and doing everything in his doggy power to avoid Simon, even turning his back on him. Every time he looks at him with those sweet retriever eyes, he quickly looks away as if wishing Simon would disappear. 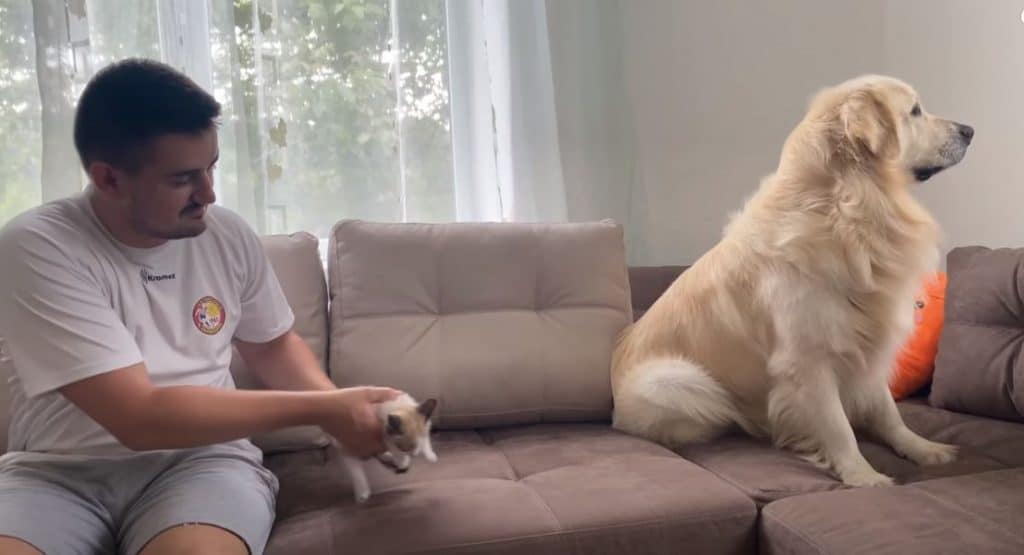 Dad sets the kitty down and Bailey climbs into his lap. He takes a sniff of the air near Simon but clearly not ready to get any closer. Bailey is acting so silly at this point, it’s impossible not to laugh at his antics.

He then starts to go a little nuts and plays with dad, hiding his face in the couch, and basically acting like a big goof ball. Simon quickly puts him in his place with a little hiss that takes Bailey down a notch. 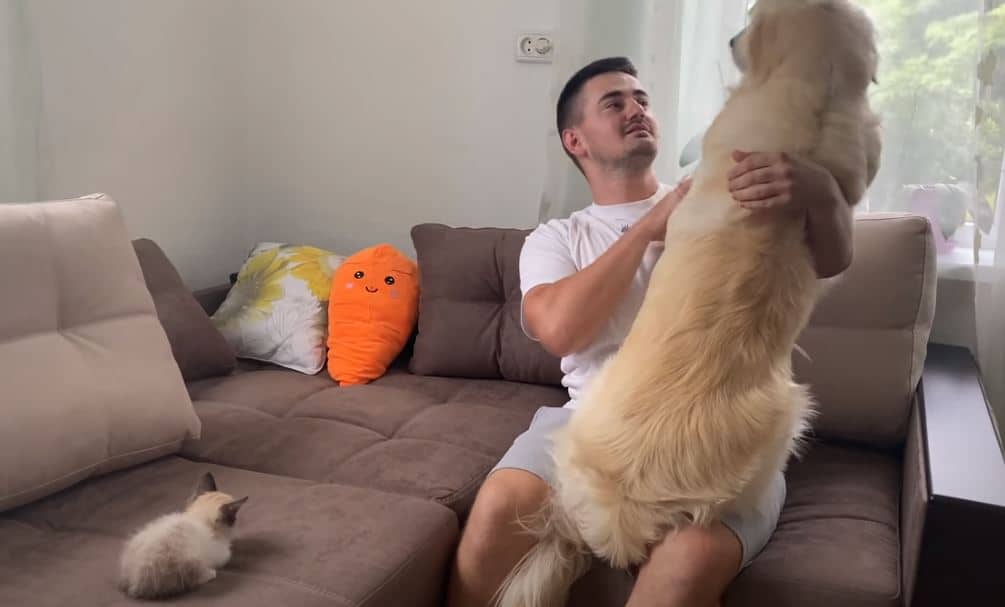 Trying a new tactic, dad puts Simon on his lap and itches down the couch toward Bailey. But the hilarious Bailey just stares out of the window pretending he doesn’t know what’s going on. When dad gets closer off he goes to chase his tail and act like a goofy boy.

The scene gets even funnier when dad finally encourages Bailey back onto the couch and uses his tail as a cat toy for Simon. Bailey is not amused but we are. Even placing Simon on the floor is not enough to encourage Bailey to make his acquaintance.

We’re sure these two cuties will one day be friends but in this video, it surely didn’t happen.