The adorable Instagram star, agoldennamedkevin aka Lil’ Kev, recently visited the Clearwater Marine Aquarium in Florida where he met a beautiful rescued dolphin named Winter.Lil’ Kev was obsessed with Winter’s videos and had been watching her on-line journey so he was super excited that the special trip was made pawsible.

Winter was placed at the Clearwater Marine Aquarium after an injury left her unable to live in the wild. According to the aquarium:“Winter, our most famous Atlantic bottlenose dolphin, is the star of Dolphin Tale. After losing her tail from becoming entangled in a crab trap line, the team at Clearwater Marine Aquarium worked with the Hanger Clinic to develop a prosthetic tail, allowing Winter to make a full recovery!”

Winter was found when she was two months old tangled in crab trap line, which cut circulation to her tail flukes. This eventually led to a deterioration and loss of her tail. While most dolphins in this situation wouldn’t survive, Winter adapted to her new physical form and made a complete recovery. 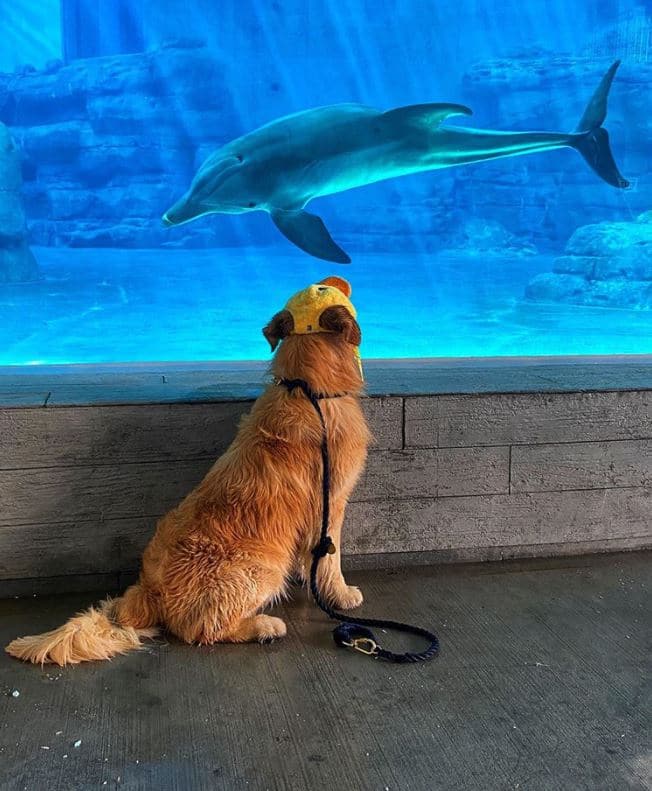 At her new aquarium home, Winter loves to play with rubber ducks and dolphin friend, Hope. If you know anything about Kevin, then you know that he is a huge duck fan, too. Kevin even has a duck hat.

The aquarium sent Kevin a big shout out and showed him a video of Winter playing with her duck. Of course, then Kevin had to meet the dolphin for himself so he traveled to Florida for his big adventure.

He met Winter, Hope, some sting rays, and pelicans that reminded him of his beloved ducks. He even got to swim with some dolphin trainers. What a great day to be a dog star!