One man’s small mistake turned out to be the start of a new life for a misfortunate dog.When Jack Jokinen failed to close his front door properly one night, he went to bed completely unaware that he was setting off a chain of events that would result in him gaining a new family member.The next morning, Jokinen’s wife woke him up and told him that there was a strange dog in the house.

Jokinen got up, and sure enough, there was the dog waiting in his living room.The dog was shaking with cold and neither Jokinen nor his wife could figure out where on earth she’d come from.The door was closed, and they were slightly worried that perhaps the little dog wasn’t the only one who was hiding in their home.Then, Jokinen decided to check the security footage, and the mystery was solved.

The security footage showed that Jokinen had accidentally failed to close the front door securely. 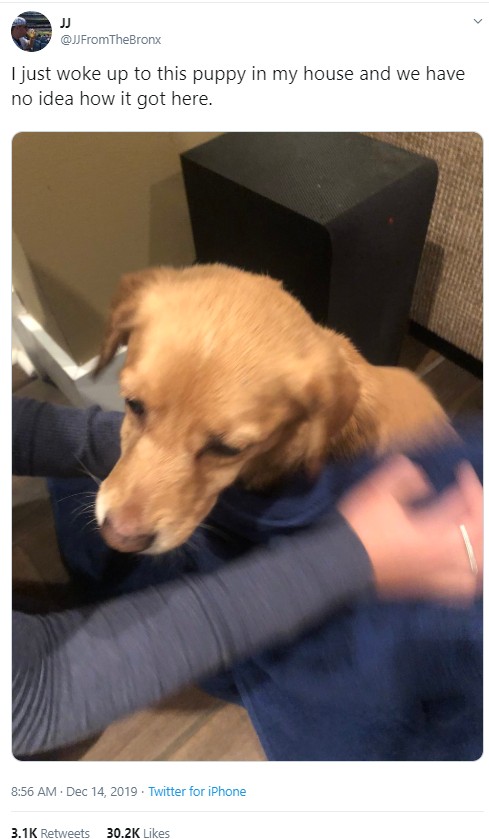 Jokinen had attempted to close the door after returning from a walk with his doggy George but didn’t notice that it failed to latch properly.

The wind later blew the door open and provided a stray pup with the perfect opportunity to escape the cold.

From the tape, they learned that later that night, a poor little dog had come wandering down the street and noticed that the family’s front door had been left open. 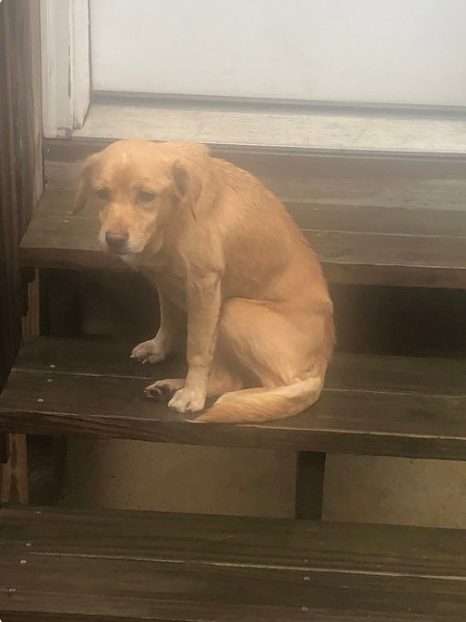 In the video, the stray, later named Suzy, can be seen hesitating before making up her mind and venturing into the house.

She’s was soaking wet from the rain and cold to the bone. She curled up inside and was then discovered by Jokinen’s wife the next morning.

Further viewing of the tape also revealed why Jokinen and his wife had found the front door closed.

After Suzie was already safely inside, a good Samaritan walked past and noticed the open door.

The man looked inside and yelled to check that everything was okay, before pulling the door closed and continuing on his way. 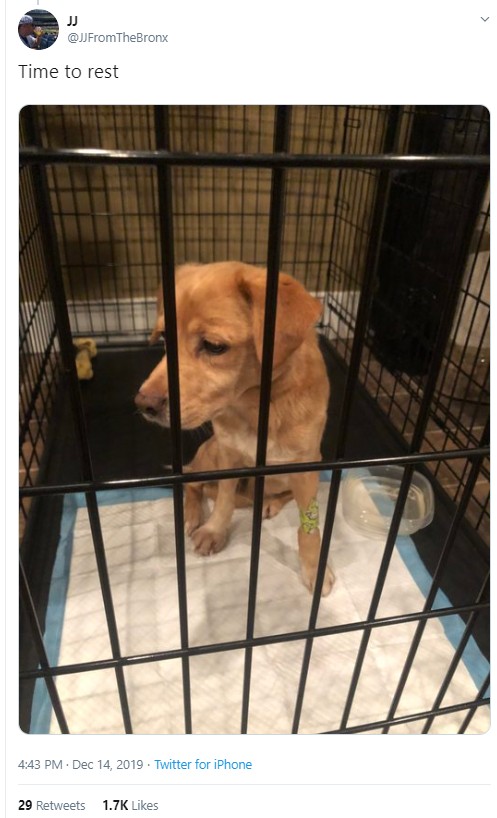 The kind man had no way of knowing that he had accidentally made sure that Suzie could not get out of the house before the family woke up and discovered her.

After finding Suzie and figuring out how she got there, Jokinen and his wife dried her off and slowly realized just how sick and in need she was.

They’d initially considered handing her over to animal control but they were worried that she would not fare well in a shelter.

Instead, they decided to take care of her and make sure she got the help she needed.

They took her to the vet who revealed that she was nine years old and unchipped.

She was diagnosed with dental issues, a paw infection, heart murmur, and a flea infestation.

Poor Suzie was also so thin and malnourished that her ribs were showing.

Jokinen and his wife decided to keep her and get her the treatment she required. 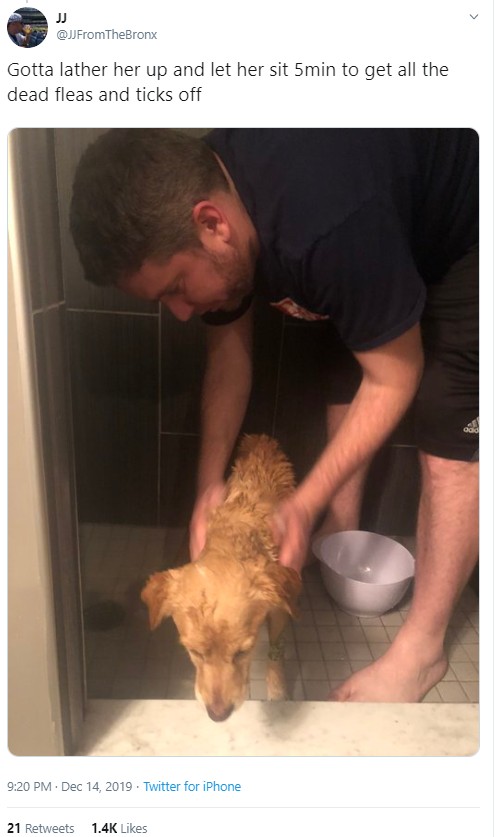 After sharing Suzie’s story on social media, Jokinen received requests from multiple people to start a GoFundMe so that people could help Suzie.

Jokinen started a fundraiser for Suzie but stressed that even if no one donated anything, he and his wife would still make sure that Suzie got the help she needed.

In the end, 15,000 dollars were raised towards Suzie’s medical bills. You can donate too via Jokinen’s PayPal and Venmo accounts.

Suzie’s is now settling into her new life.

She’s finally safe and cared for and is enjoying the love and affection she’s receiving from her new family.

She loves her new cosy dog bed and her new brother George is sensitive to her needs and is giving her some space while she gets used to her new life.

Suzie is slowly regaining her health and on her Instagram, her followers have already started to notice that she’s looking a lot healthier and happier. 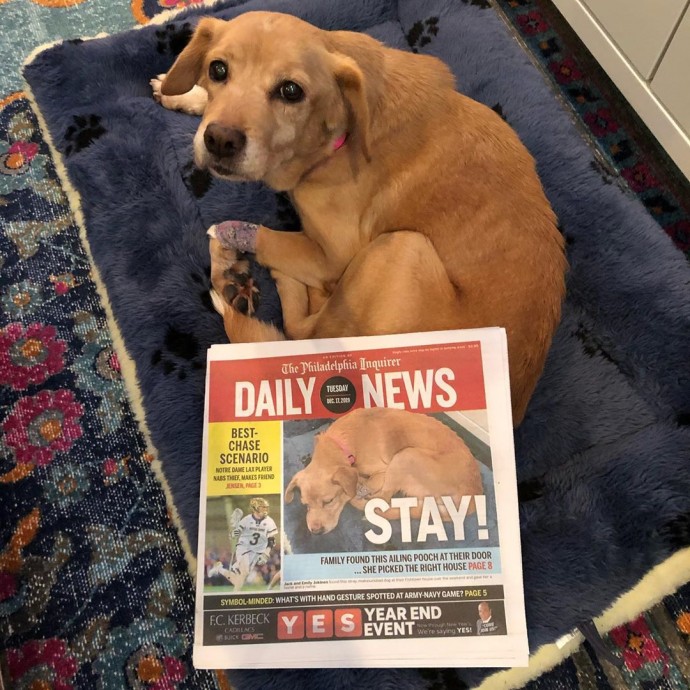 Thanks to a sloppily closed door, the senior pup is now able to live out her life in comfort, surrounded by a loving family.

Jokinen and his wife adore their sweet new family member and count themselves lucky that something as unsafe as leaving their door open resulted in something so wonderful. 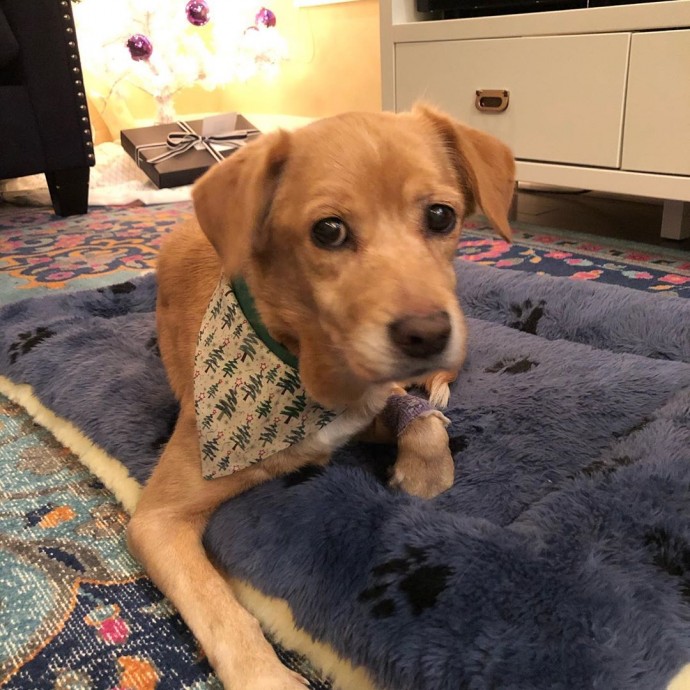 Adorable Fox Is Caught Napping On A Tree Stump, And The Photos Are Adorable Dog Doesn’t Recognize His Military Mom At First, Then Gets A Whiff Of Her Scent