Dogs are scared of fireworks. They perceive fireworks as a threat to them and try to hide and run away. They start barking and sometimes even show signs of anxiety-like restlessness, panting, pacing, and whining.So as people prepared themselves to enjoy the celebrations of the Fourth of July with fireworks, it is not going to be an as enjoyable or fun thing for animals.

As dogs are easily triggered by the noise of the fireworks, their owners were making effort to keep them calm.But what would happen to the dogs which are not having someone to look after them means to give them headphones or iPads. This would be the problem faced by the shelter dogs who would be wondering what was happening outside.Fortunately, there is one group of volunteers who have taken up the responsibility of looking after the shelter dogs. This is their new holiday tradition.

Last year when the fourth of July approached, the workers at Maricopa County Animal Care and Control in Arizona prepared themselves for the panic that the scheduled fireworks would cause to the dogs in the shelter.

Shelters are a very stressful place for animals. They are not very happy there and when they heard the loud noises of exploding fireworks, it makes them even more anxious. 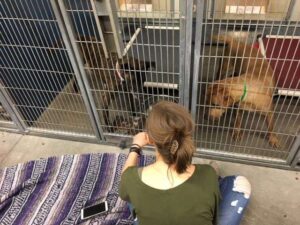 So the question is what could be done by us to keep them calm.

The answer is to call all the volunteers to come to the shelters on the Fourth of July to give company to the dog and this event is called Calming the Canines. It was quite successful as hundreds of people spent their holiday comforting the anxious dogs.

People of each age group participated in it like the kids read storybooks, instruments, and music was played. The volunteers did everything possible to make the shelter a safe place for the dogs. 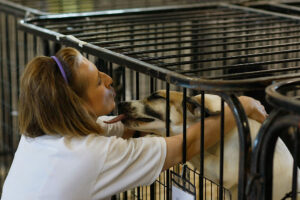 Some volunteers were walking around spraying a bit of lavender oil which gives relaxation and classical music was played to relax the dogs. All these things helped a lot to calm the atmosphere.

We know dogs react strongly to fireworks as they hear noises at a much louder decibel than human beings. During any kind of festival when there is a use of fireworks, dogs feel very uncomfortable.

The volunteers soothing efforts made a huge difference to the dogs and they were completely relaxed. It is really good to know that some people dedicated their holiday in such a good way to help the shelter dogs.