Sometimes we don’t know anything about the animal by looking at it. It is only when we try to help it that we come to know that the animal is different.The same thing happened to Joshua Hiebert last June when he was cleaning up his garden in Tampa, Florida. He saw something huddled in his driveway. Hiebert said that as he was walking back to the house, he noticed the little lump of an orange kitten that was sitting against their garage door.

The kitten was sitting in the sun on the concrete and it was 90 degrees outside. Then the man checked for the kitten’s mom but there was no sign. Hiebert knew that a feral cat colony lived in his neighborhood and he was always kind to them.Then Hiebert opened the garage door and the kitten came inside and sat in a corner. Hiebert said that the kitten was very weak and he was unable to raise his head.

He was not even bothered by their movement. So they concluded maybe the cat was dehydrated.

Then the couple Hiebert and Tortelero gave the kitten a bowl of water and they saw the cat instead of drinking it directly, dipped his paw in, and tapped the water before he drank. At that time, they realized that the kitten was blind. 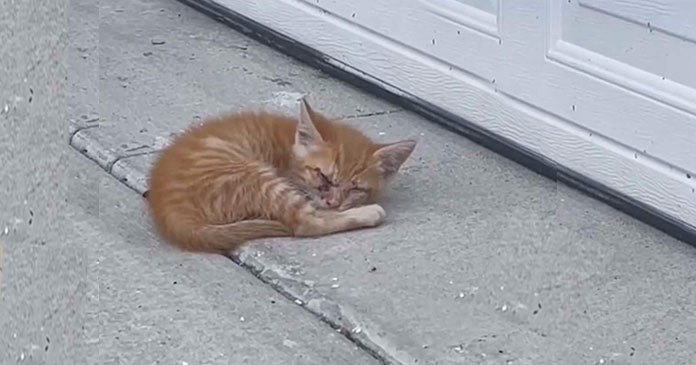 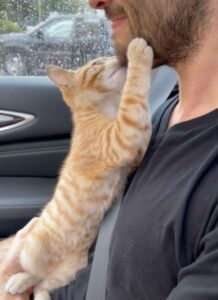 Then the kitten was brought to the vet for a checkup and he was given eye drops and eye lubricants and antibiotics. With this treatment, though his eyes were getting better yet it was clear that the kitten was entirely blind. He could only see the changes in the light and movements. His family still hopes that the cat’s vision will improve with time and care. 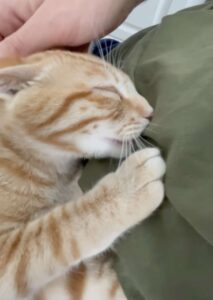 Now Whiskers is 6 months old and he likes to play with his dads and his two dog siblings and he is full of energy and independence. He is very gentle and he is very happy when he is near one of his dads.

Whiskers is still healing and growing. We are glad that his family loves him a lot. Tiny Puppies Jump All Over Giggling Baby, Attack Him With Their Hugs And Kisses Old dog runs away from home to visit neighbors