So far, Queen’s life has not been an easy one. But she now has her own guardian angel to keep her company and ease her loneliness.No one knows Queen’s life story but what we do know was that when she was found living behind a dumpster, she was taken to the Great Plains SPCA Shelter in Kansas. Soon after, she underwent surgery to repair a knee injury similar to a torn ACL.

During her recovery, no one could find any evidence that she had ever lived with a family of her own. But it was quickly discovered that she loves people and has lots of kisses to give.This adorable, sweet dog is estimated to be about 3 years old and loves to play. Despite her great personality and off the charts cuteness, she has been overlooked for adoption for over 400 days.

When shelter life and loneliness began taking a toll on Queen that is when her own personal patron saint, Scott Poore, moved into the shelter to help keep her company until she could be adopted.

Poore, who is dedicated to helping overlooked shelter dogs and cats find homes, noticed that Queen was declining, he knew he had to do something to lift her spirits and help her find her forever home. 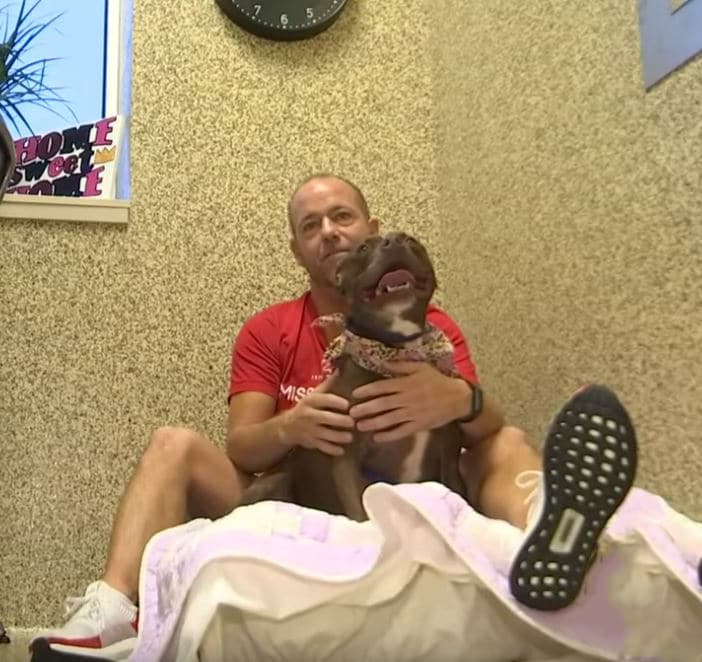 Poore moved into the animal shelter and set up a cozy albeit small, space to share with Queen. He decorated the room with a plant, books, and has a baby mattress on the floor, where he sleeps next to Queen.

He plans to stay there until she is adopted.

“I’ve got my laptop, my desk, my lamp and I brought a plant in,” Poore told a CNN affiliate KCTV. He plans to stay for the long haul and won’t be taking time off from his job during his shelter stay. He oversees Mission Driven LLC,, a clothing brand bringing awareness to shelter pets and the importance of adoption, according to the company’s website.

“Every time I came, she got so excited, but the last couple months she won’t even get out of bed…She keeps getting looked over and that’s the thing that’s driving me crazy,” he said.

Sadly, Queen is not alone in her fight to find a home. About 6.5 million animals enter American animal shelters every year, according to the American Society for the Prevention of Cruelty to Animals, but only 3.2 million are adopted each year.

Please share this story and help Queen find a home. During the month of September, an unnamed benefactor offered to match donations made to the Great Plains SPCA, up to $150,000.