When a pet goes missing, it surely breaks our hearts. We wander from place to place in search of it but we are not able to find it. Days turn into weeks and months and years, but we never give up hope.The same happened with Janet Adamowicz in 2005 when her cat Boo ran away from home. At that time she did everything she could to get her back home. She put her posters everywhere she could and even placed her ad in a local newspaper in her hometown Harrogate, England.

But when she did not find her for a year, she gave up hope and just wished that she is healthy and that she found another loving home. Janet then adopted two cats- Ollie in 2008 and Tessie in 2014.But as luck has it, after 13 years suddenly one day she got a call asking if she had a cat missing. Janet said that she didn’t as both her cats were there at home. But they informed that they have looked into the system and found that it was her cat called Boo.

Janet thought it was weird and she went to the vet and they had the cat and the cat still remembered Janet. It was quite strange to know where she had been all these years. Maybe she was a stray fed by strangers or she caught her own food. 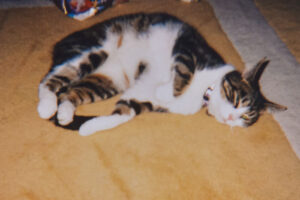 It was really good to know that the cat was in very good health. However, she seemed somewhat dehydrated and tired. She was found by a woman in a town which was 40 miles away from where Janet lives. She was wandering there and the woman took her to Wicstun Vets in York.

According to Janet, Boo was very lively when she was young and she enjoyed the outdoors and adventures but she didn’t know how she ended up 40 miles away from the house.

Though she was only 5 years old at the time when she went missing yet she remembered Janet and has been with her as her shadow following her everywhere. The union between Boo and Janet was very emotional and everyone was unable to hold their tears. Boo recognized her mom at once and within the moment they enjoyed plenty of face rubs, cuddles, and meows.