This is the moment a police dog had a joyous reunion with his handler after being lost in the mountains for seven agonizing days.
Thames, the german shepherd went missing during a routine search and rescue training exercises in the mountains of New Zealand.His handler, Constable Mike Wakefield, searched tirelessly for him, day and night for seven days straight.

On the seventh day of searching, one of the search team found a muddy footprint, which looked a lot like a dog’s. This gave them hope he was still alive. Shortly after, the 3-year-old German shepherd appeared from a bush in the clearing.“I whistled and called but he ran off as if to say come this way before running back and giving me a big lick”

Thames clearly couldn’t contain his excitement to be reunited with his friend, and he jumped on him excitedly and gave him lots of licks and kisses.

Lost Dog Couldn’t Contain His Excitement When Reunited With Human

Thames was fortunately in good shape when he was found, although he was a little skinnier, he was still able to make the four hour hike out of the mountain range, along with his rescuers. 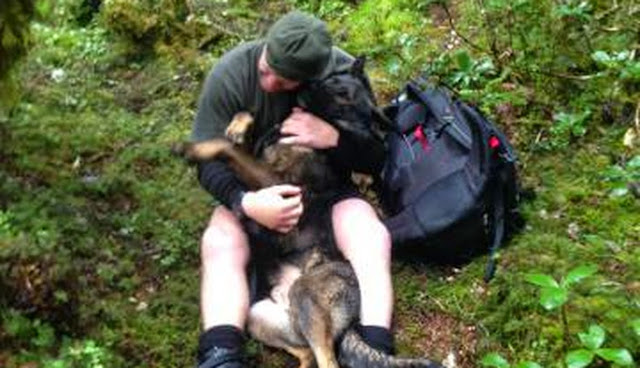 “He wolfed down half of my salami which is a treat for him,” James said in a release. “I gave him a cuddle and we had a big play. I was just lost for words.”

Glad to hear Thames was found safe and sound!