One unfortunate day, eight baby hedgehogs lost their mother. They were newborn and desperately needed some care and love.
In an unexpected twist, the hedgehogs did find a surrogate mother, but this was was Musya, the cat, who can be seen feeding the babies in this extraordinary video.The baby hedgehogs refused to be fed unnaturally, ie from a bottle or syringe.

And since they were newborn, they were blind which meant they couldn’t fend for themselves. They were beginning to starve.That was until Musya the cat stepped up and became a wet nurse to all the babies.When eight baby hedgehogs lost their mother, newly born and in desperate need of milk and affection, their future looked worryingly uncertain.

But the hoglets have found an unlikely wet-nurse in Musya the cat, who can be seen feeding the babies in bizarre video footage (pictured)

She still had milk left in her from taking care of some other foster kittens, and luckily, the baby spike balls took to her immediately.

But Musya didn’t stop there with her motherly duties, she also takes care of them at night.
Before their adoption the baby hedgehogs refused to be fed from a bottle or syringe and, still blind, were beginning to starve at Sadgorod Zoo in Vladivostok, southeastern Russia 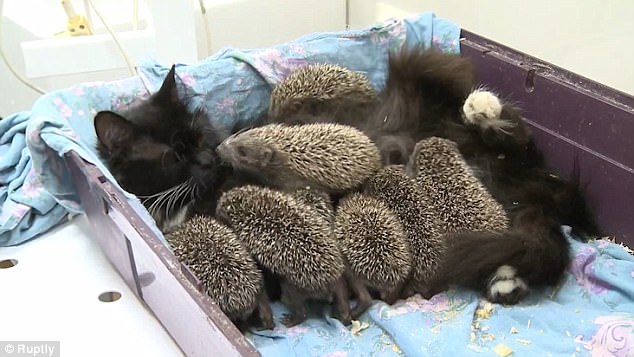 The ‘adoption’ seems to have gone smoothly with both parties happy, although Musya has been letting out a hiss when the babies are a bit too prickly.
The zoo was left with little choice but to try putting the mammals with a new mother. Musya still had milk left after taking care of foster kittens and the youngsters took to her immediately

“The hedgehogs’ mother was hit on the head by a lawnmower. Her eight babies were left without a mother. 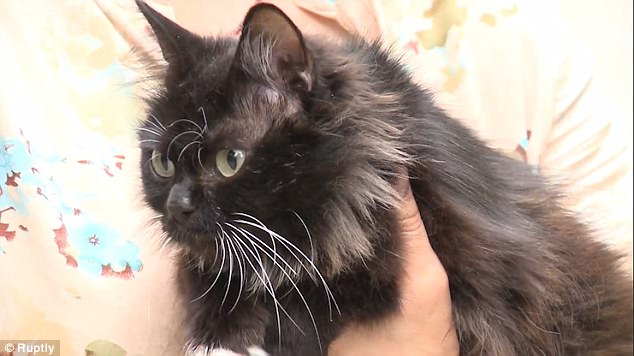 ‘They didn’t eat on their own. After two days, the hedgehogs were becoming hungry,” said Alyona Asnovina who was observing the group.

Going the full hog: Musya not only feeds the hoglets, but also takes care of the babies at night

She added: ‘I saw our cat Musya in the yard. I quickly grabbed her and put her by the baby hedgehogs. 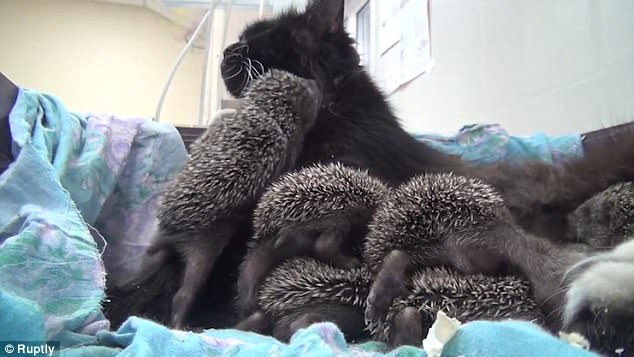 ‘Literally, after a couple of seconds they approached the cat, they understood at once what to do, having felt her warmth and the smell of milk.

‘Surprisingly, the cat also understood instantly what was expected of her. She lay down and fortunately, the hedgehogs began to nurse.’ There’s A Shelter Called ‘Land Of The Strays,’ And It’s Paradise For Dogs