In a shelter in Claremore, Oklahoma, was a one-year-old Border Collie named Kong. He suffered from a painful skin disease and was sunburned so badly he couldn’t even be touched. Patches of white fur were missing all over his body with his pink skin showing through.Kong was eventually taken in by Border Collie Rescue & Rehab in Prosper, Texas, where he was healed up with lots of love and care.

The rescue dropped his name, and he simply became known as #387 on their website for adoption purposes.Even without a name, someone fell for the little white dog with a neglectful past. Curtis Hartsell was browsing the dog’s profile and fell in love with the description and single picture. The dog seemed like the perfect fit for him.

Curtis continued to keep in touch by asking for daily updates throughout the adoption process. After several interviews and a home visit, his application was approved and accepted. It was time for Curtis and #387 to meet for the first time. Curtis named his new buddy ZIB in honor of the famous Soviet space dog. He felt the name was fitting because both dogs were once lost before being nurtured back to health, and “he and I are off to the stars together!” as he told The Dodo. Curtis excitedly arrived at ZIB’s foster home where a friend managed to snap a picture that captured a powerful moment. He knelt down after being handed the dog’s leash and asked ZIB if he wanted to go come with him. The dog looked into his eyes, hugged him, and bowed his head. It was a moment he’ll never forget. 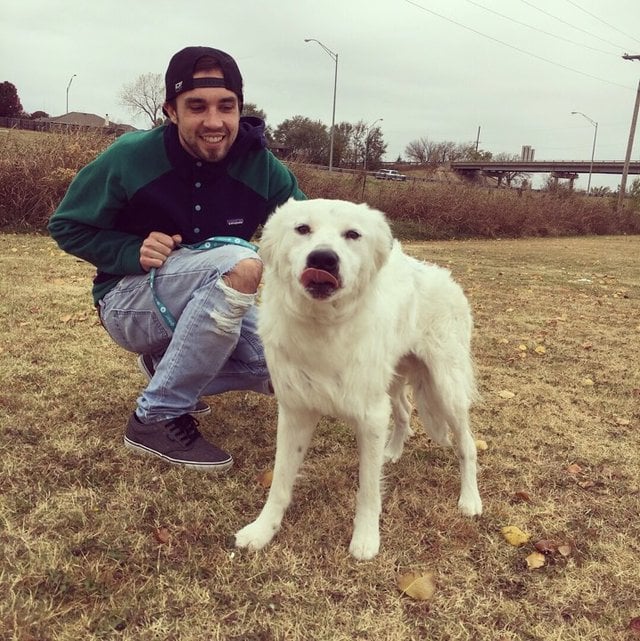 For a puppy who was once in so much pain that he couldn’t be petted, ZIB can’t be cuddled and touched enough now. The dog is incredibly happy in his new home and is fitting right in. Now they can’t imagine life without each other. And there’s nothing Curtis wouldn’t do for his new best friend.