Like all girls, Hallee Fuqua dreamed of having a dog of her own one day. Since her parents said she couldn’t get one until she graduated from college, she thought she’d have a long wait but along came a dog that changed everything.Hallee loved dogs. So much so, that since her parents made it clear she couldn’t have one of her own until she graduated from college, she began volunteering at the Humane Society of Stillwater just so that she could spend time with them.

Of course, as fate would have it, while there she fell in love with a dog named Rambo who had been rescued from the streets. The feeling was mutual and the 2-year-old Plott Hound mix adored Hallee back and excitedly awaited each of her visits.While Hallee dreamed of adopting Rambo after graduating from college, her parents decided to rescue the sweet pup as a surprise for their unsuspecting daughter.

The shelter even went along with their plan and broke the news to Hallee that Rambo was adopted. 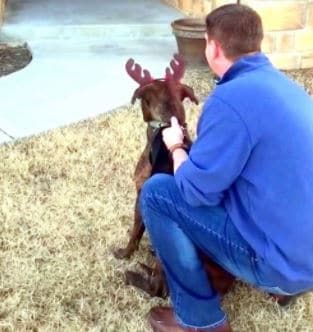 Then on Christmas morning, Hallee got the surprise of her life. While her dad waited outside with Rambo wearing deer antlers, Hallee opened the door of their home and was frozen in shock. Finding her voice, all she could say was, “what?” and bursts into happy tears. 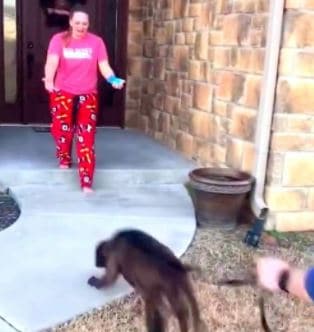 She then moves toward the dog, calling his name, as she sits on the porch. A delighted Rambo runs to her and leaps into her arms. By this time, her brothers are coming outside to see what’s going on and she tells them, “this is Rambo.” 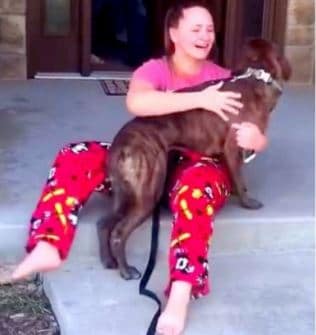 The entire family is overjoyed at the surprise and none more so that Rambo who went from the streets to a loving forever home with people who adored him. The adorable pup may not have understood that it was Christmas but he certainly gave this family the best gift ever and deeply touched Hallee, who loved the special pup so much. 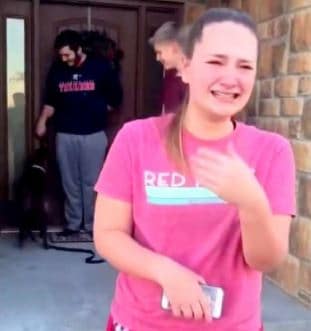 We’re so happy that they can be together forever. Friendly Dog Loves Visiting All His Friends During Walks 90-Year-Old Woman Declined Chemo, Lived Life To The Fullest By Traveling With Her Dog

Dog Frequents Hospital To Wait For Sick Owner Outside