Pit bulls are known to be great family dogs that are affectionate and loving. So when a stray cat in Mexico needed help in her time of need, she knew who to turn to for support. Now the sweet pit bull is showing the world what friendship looks like.Hades the pit bull lives in Mexico with his kind owner, Juan Jose P Flores. When a stray cat showed up in their neighborhood, Juan began setting out food for the neglected cat so she wouldn’t go hungry.

Despite his tough name, Hades is a sweet and gentle dog. Even so, Juan never dreamed that his pup would become a friend and protector of a small pregnant cat that needed his help, but that is exactly what he did.One day, Hades created a commotion at the back door so Juan went to see what he was carrying on about. When he went to check on him, Hades led him to his dog house.

When Juan looked inside, he was shocked to see the stray cat snuggled up on Hades’ blankets, making herself at home. 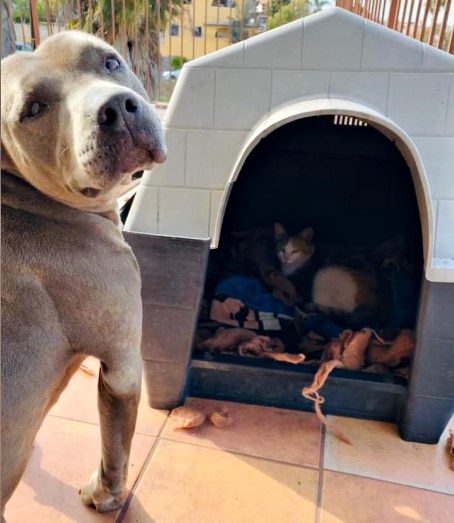 Hades was very proud of himself and was happy to share his house with his very pregnant furry friend. He never left her side and stood guard at the door of the dog house and watched over her while she gave birth to two tiny kittens. “I think he felt that he was a father,” Flores told The Dodo.

Juan named the cat Nicol and has given her a forever home where she will be cared for and loved. He will find homes for her kittens as soon as they are old enough to be adopted. 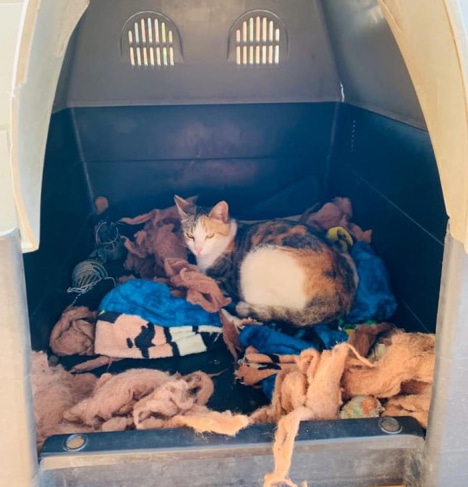 In the meantime, the pictures of the cat moving into the dog house of the pit bull went viral with many jokes about a tiny cat taking over the house of a big dog like Hades. Juan also joined the fun saying, “Cat taken advantage, with that you don’t have to pay rent.”

All fun aside, Hades has touched many people with his kind actions. One person said, “The most beautiful face!!! They take the lead in humanity.” Flores said he shared the story so that people could see what loving dogs pit bulls really are. “Hades put everything aside to help someone else. We should do the same without expecting anything in return.” 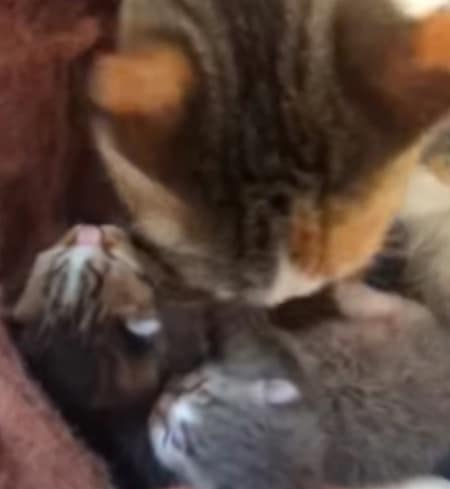 Hades is just one of the reasons we love dogs so much. They make such awesome friends. Thanks for helping that cat, Hades. You’re such a good dog and you have a great owner!