American pit bulls are known for their solid and intimidating stature. They are believed to be aggressive in nature and, more often than not, many people are scared to interact with these creatures since they are seen as dangerous. On the other hand, one might probably think that tiny little kittens are the polar opposite of these dogs.

These two contradicting species living together may be beyond our imagination, but this dog parent decided to bring home a new kitty. How would things turn out?We are lucky that the fur parent was able to capture their first meeting because it turned into the most heartwarming moment you’ll ever see!

The footage was uploaded on YouTube by 1984missdaisy who is the dog mom of this innocent-looking pitbull named Licious. One day, she decided to surprise her sweet dog by adopting a small kitten. She helped the two to get to know each other by placing the kitty beside Licious.

The kitty goes ahead and breaks the ice by showing her interest in the massive paws of the gentle giant. 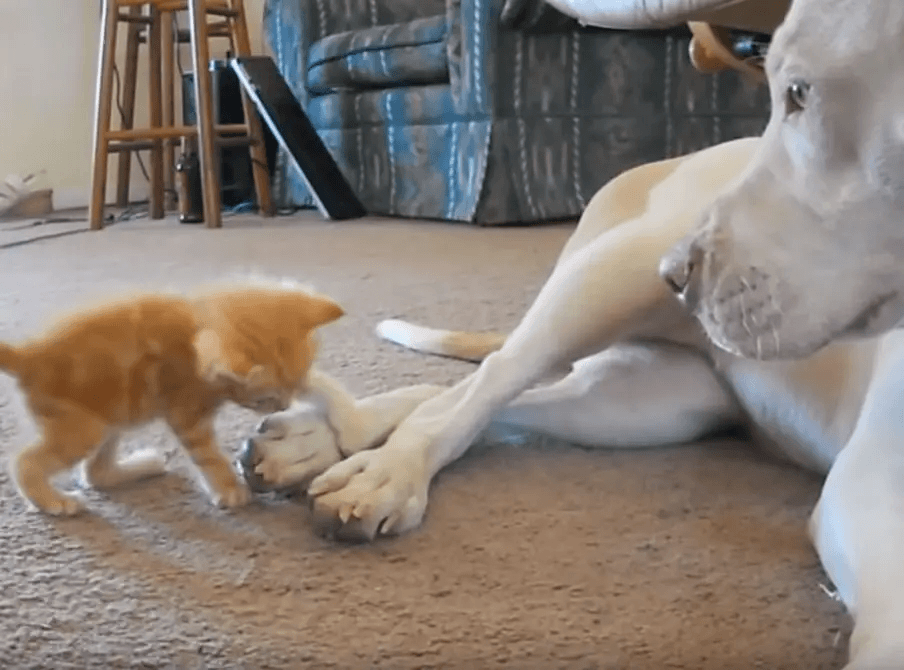 Out of curiosity, the little ball of fur starts to sniff, touch, and play with the dog’s paws.
Meanwhile, Licious just watches her gently and doesn’t move an inch. She seems to be relaxed and not bothered by the playful kitty one bit. Her parent then asks:

“What’s that kitty doing to ya, Mama?”

This is when things started to get more interesting. Licious finally responds by wagging her tail and sticking her tongue out as she is about to give the kitty lots of love!

They may be different from each other but seem a match made in heaven.
Surprisingly, the kitty is not scared and intimidated at all and even enjoys playing with her massive friend’s “funny feet.” At the same time, the pooch now has a new baby to look after.

Contrary to popular belief, dogs and cats actually have a strong connection and can learn to tolerate each other. According to the AKC, certain dog breeds such as Basset Hounds, Labs, Golden Retrievers, Beagles, Pugs, to name a few, are “typically good with cats.” With a good introduction, socialization, and training, dogs of any breed can live harmoniously with a cat despite the differences. 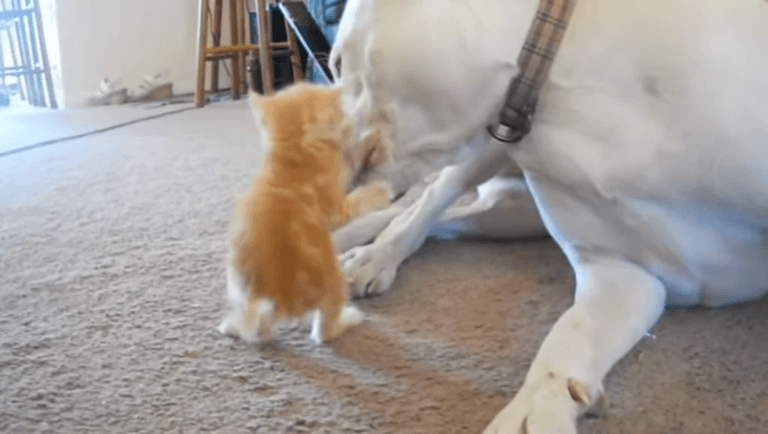 Licious is kissing and grooming her buddy so much that in fact, their parent has to step in and stop her.
The woman says:

“Lish, enough with the licking. Lish, no more kisses!”

They say all good things come to an end. But let’s be honest, we could watch this heart-melting sight all day!
Another viewer commented:

“Oh…oh my… this is too much cuteness then I can handle.”

The recorded moment of the pair’s first meeting has been viewed 9.9 million times since then.