A homeless, pregnant pit bull was wandering the streets of York, South Carolina, on a cold winter day when animal control picked her up. Instead of taking her to a shelter, they decided to contact a local rescue to take her in. The officers knew it would be the better option for the soon-to-be mama to give birth in the more comfortable setting rather than some scary shelter.

It was Halfway There Rescue who agreed to take in the pregnant pit, and they named her Daya. Unfortunately, Daya lost her babies in utero and caught a bad infection that would require surgery. She was having the worst luck but got through the operation smoothly and went on to live at a foster to recuperate.

The sweet dog was now safe, but she still had a huge hole in her life. The staff noticed Daya would take in socks and toys and treat them as if they were her puppies to fill the void in her heart. 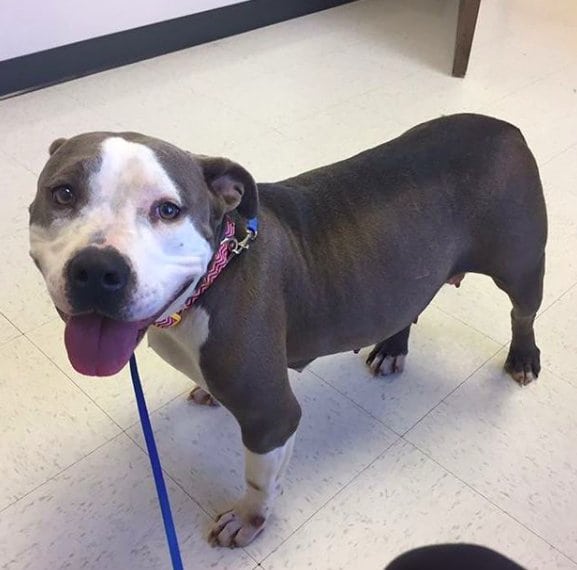 So they decided to do something about it. Daya was introduced to an orphaned puppy who Halfway There Rescue took in after finding her on the street. A ruptured eye had to be removed, and she needed a mother more than anything. It was the perfect opportunity. And it turned out to be exactly what each dog needed! Daya and Raisin took to each other and hit it off right away. Daya was the mom Raisin never had, and Raisin the baby Daya had been waiting for. The two went to live at another foster where they could continue to bond and heal. As they got older, they each became more and more independent. Raisin was now old enough to find her own way in life, and the foster family decided to adopt her! Raisin now has a dog brother named Charlie whom she loves very much. The owners give all the credit in the world to Daya for making Raisin the dog she is today. Daya would go back to live with her original foster, and they ended up adopting her! Daya now has a dog sibling who suffers from anxiety, but she knows just how to help calm him. They are inseparable best friends. Daya and Raisin have each other to thank for how they turned out. They’re both in amazing places in life and loving their forever families. Amazing Moment Very Good Pup Sniffs Out Someone Who Needs His Help.