Caught on surveillance camera, a poor little white dog was walking along minding his own business when suddenly he fell in the backyard pool and couldn’t get out.The accident happened April 8th in Boksburg City, South Africa. A 13-year-old white Pomeranian named Chucky was walking along the edge of the pool. Not watching where he was going, he suddenly took a misstep and fell into the clear blue water.

For a moment, it looked like Chucky would be able to stand on the top step of the pool and climb out but the surprise of the fall must have disoriented him because instead, he floated away and began to tread water.As Chucky paddled, his friend, a 7-year-old black Staffie named Jessie approached the pool.

She tries to reach Chucky but at that point, the tiny dog is treading water next to a block wall that prevents Jessie from getting close. 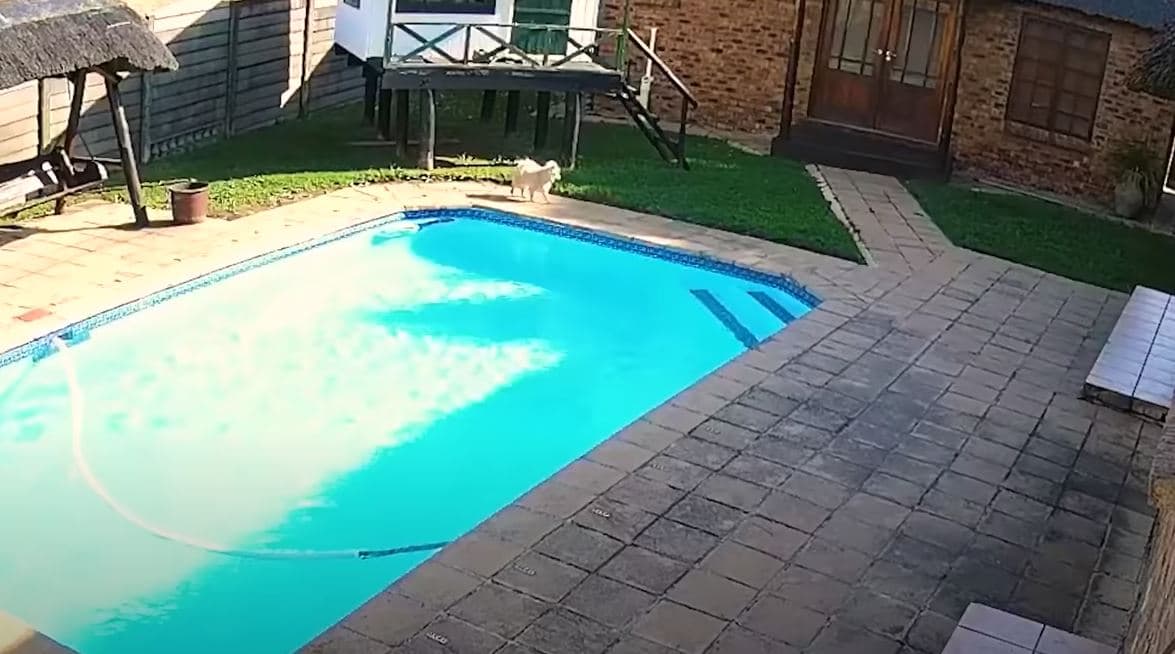 As you watch Chucky swim and move about the pool, tensions become high. It becomes obvious that this situation is serious. There is no one home and the small senior dog is not able pull himself out of the pool.

The fear the poor dog must be experiencing is intense. For a full 34 minutes, Chucky treads water, clearly becoming exhausted. Meanwhile, concerned Jessie is trying to help the best that she can.

Around and around Chucky paddles while Jessie follows. Over and over she keeps trying to pull her little friend from the water and loses her grip. She then watches helplessly while the older dog slides back into the water. 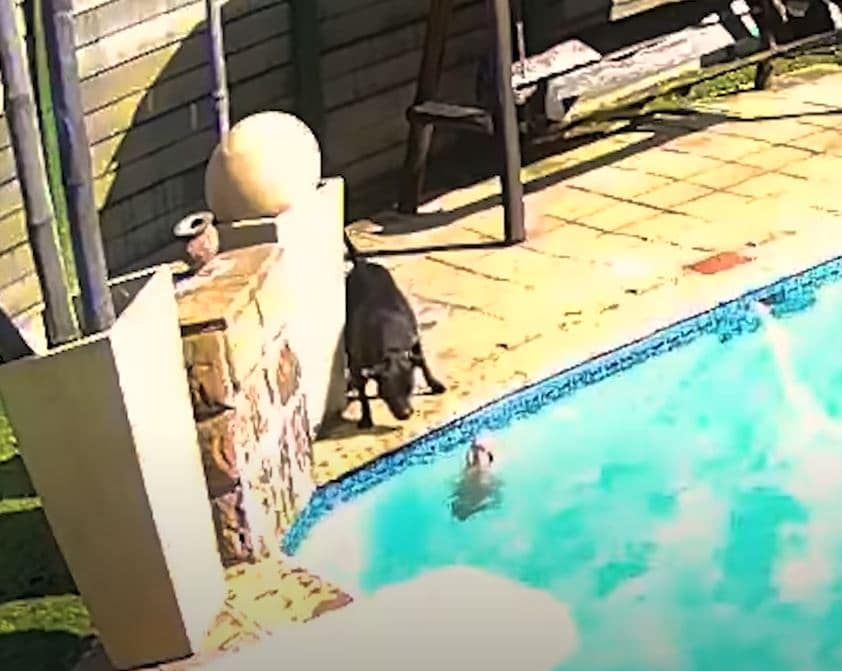 Finally, when all seems hopeless, hero Jessie pulls her friend from the pool and saves his life! The two then run off and are seen on another security camera, seemingly in another yard. When they can no longer be seen, one could imagine that both need a rest after the scary ordeal.

When their owners got home and found the wet dogs, they became concerned. So, Byron and Melissa Thanarayen, watched the security camera by the pool to see what the two dogs were up to. Bryon said, 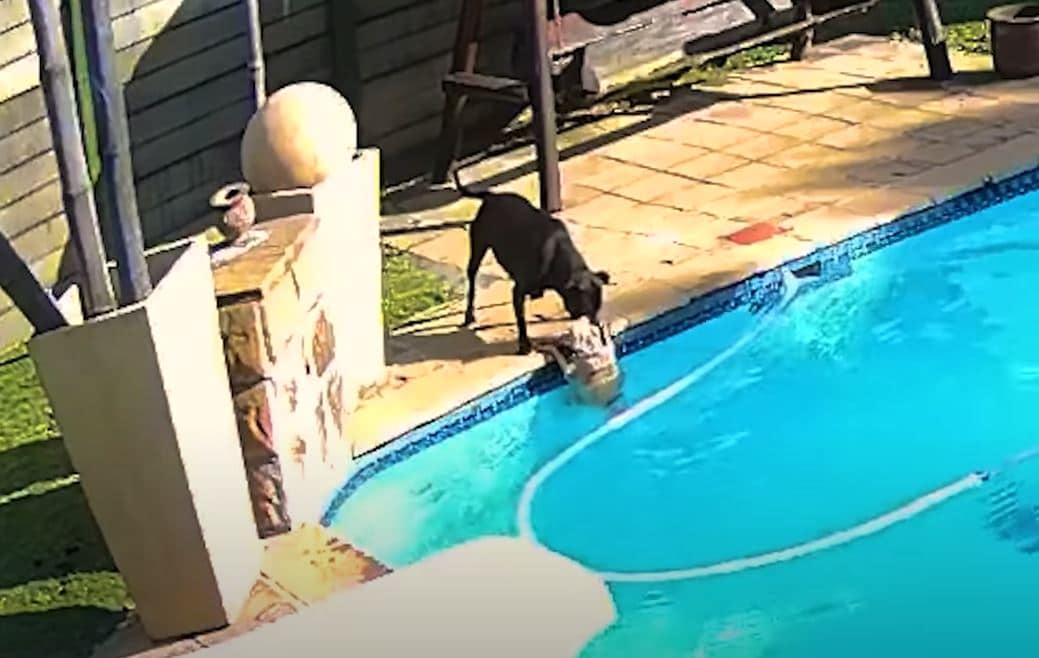 “We tried to look for clues as to where he could have wet his head. We thought maybe he dipped his head in the water, but there was no mess in the house to support this suggestion.”

“It was heart-wrenching to watch. We still struggle to watch that video today, just thinking of what could have happened if Jessie was not there.”

Byron also shared that Jessie had been a troubled rescue they adopted four years prior. When they got her, it was Jessie’s third home, all previous fosters returned her to the shelter. He said, 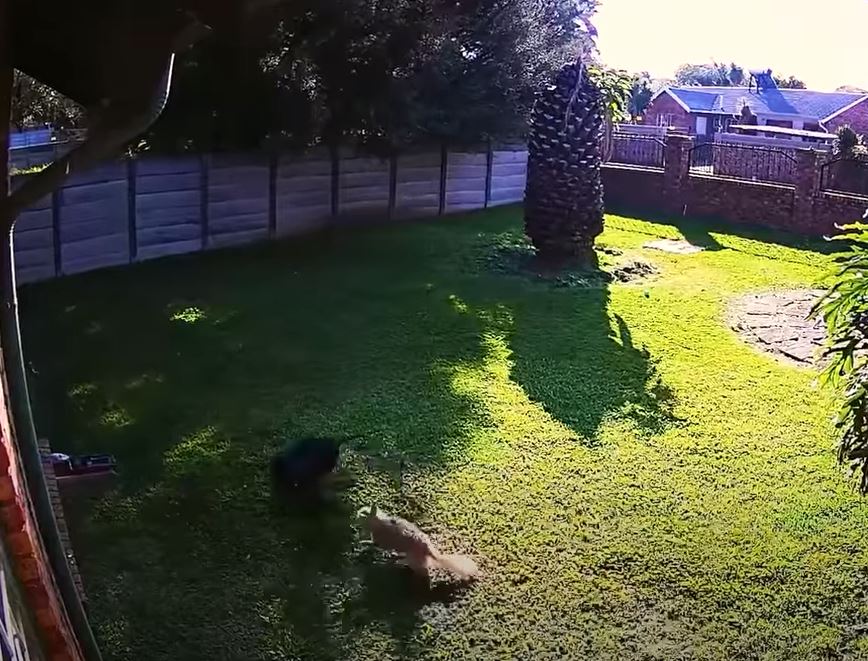 “Previous owners complained Jessie was difficult with other animals but she got along with our other two dogs from the word go. I’m really proud of her, considering she is the youngest. Our dogs know how to swim but they always swim with us and not when we are not with them.”

To prevent similar incidents from happening in the future, the couple is now hiring workers to install a cover for their pool.