Two French bulldogs, Lola and Nacho, have developed a special bond with their family horse, Bon Jovi.They all love spending time together, just playing around or hanging out.The two have since learned to grab Bon Jovi’s reins to lead him out on a walk!This family’s dogs have developed a special bond with a new member of their family, a miniature horse named Bon Jovi (nicknamed Bonnie).

It got into a point where the dogs started giving Bonnie a walk!Jessica Chemin, 21, adopted Bonnie four years ago after he was rescued from an abusive home.She shared, “He was named after Bon Jovi because of his wild nature, but after living with us he has calmed down so much and become such a ‘homebody’.Bonnie can also be sneaky — he oftentimes sneaks into the house to where the kitchen’s snack drawer is!

The nine-year-old miniature horse now lives his best life at his new home with Jessica, who is in her final year of studying organizational psychology at the University of Cape Town, and her two French bulldogs, Lola and Nacho. 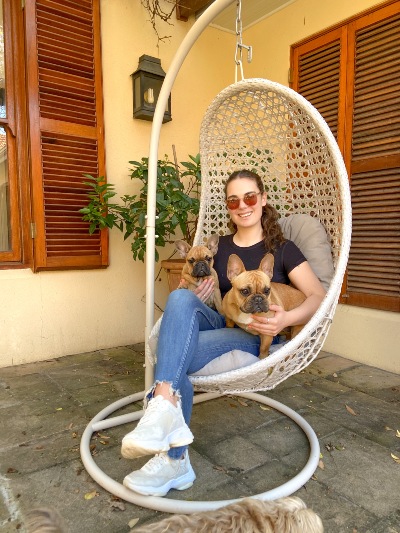 The three pets have since been the best of friends. They love playing around each other or just simply hanging out.

Their bond slowly grew into something more special. Jessica couldn’t believe her eyes when she saw the pups grab hold of Bonnie’s reins and lead him outside for a walk.

“Now whenever they see the lead rein being clipped onto Bonnie’s halter, they both want to lead him up to the stables,” she shared.

Jessica couldn’t be more pleased that the three “all get on so well.”

“I will often find Lola and Nacho down in the garden, lying on the grass while Bonnie grazes nearby,” she continued. “The three of them really seem to have the sweetest kinship and seeing their friendship makes my heart so full.