Peri the chicken was brought in by the Hubbard family at just a few days old, but six months later they noticed she got a bad eye infection. Despite daily meds and trips to specialists, her blindness was inevitable. So the Hubbards made the proper accommodations around the house to make sure the chick could live as normal of a life as possible.

And having a pit bull brother like Taj helped tremendously. It’s as if the good boy could tell his chicken sister was blind and needed help. The three-year-old dog became her best friend and main protector — a seeing-eye dog for a hen! They did everything together, but then Taj passed away in 2018 after a long battle with cancer.

Peri was devastated, and the family worried how she may handle life going forward without him. So they adopted two pit bull puppies. Peri perked up once again as happy as can be to have new friends! As they became older, Peri and Gracie really took to each other. They became as close as Peri and Taj once were. And Gracie started helping out by bringing Peri her favorite toys, worried she wouldn’t be able to find them on her own since she’s blind. It’s Gracie’s way of providing comfort and being there for her chicken sister, and it’s adorable. 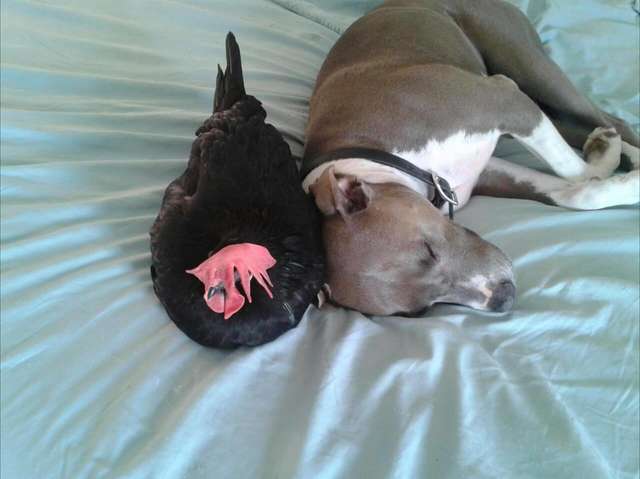 First thing in the morning, Gracie checks on her sleeping friend. And then she’ll grab a toy to place in front of her, and she waits for her to find it. Taj meant the world to Perri, and now Gracie means just as much to her. “I believe this is just the beginning of where Taj left off,” Christa Hubbard told The Dodo. “Two sweet souls have found each other.”