Walter, a wild burro whose mother abandoned him, was rescued and raised with three German shepherds. Now the super adorable donkey acts like he’s a dog-especially when he sees his dad!When Walter was a baby, he was rejected by his mother. The Bureau of Land Management tried to help the pair bond, but after 10 hours they gave up and had no choice but to help find him a home.

They reached out to Kelly and Brad Blake of Oatman, Arizona who were happy to adopt of baby burro. They reported to the Dodo:“We have wild burros that roam the town. Walter’s mama rejected him because she was too young. The Bureau of Land Management and town locals tried for 10 hours to get Walter’s mama to take to him. Nothing was working, so we were called and asked if we would like to adopt him. Of course, we said yes!”

Baby Walker quickly bonded with his new parents and adapted to his home. But it was his new dad that stole his heart. He was also raised with 3 German shepherds and now is just one of the pack.

The once sickly donkey grew up and is now a healthy 150 pounds. He lives inside along with the dogs, which showed him the ropes. According to his dad, Blake: 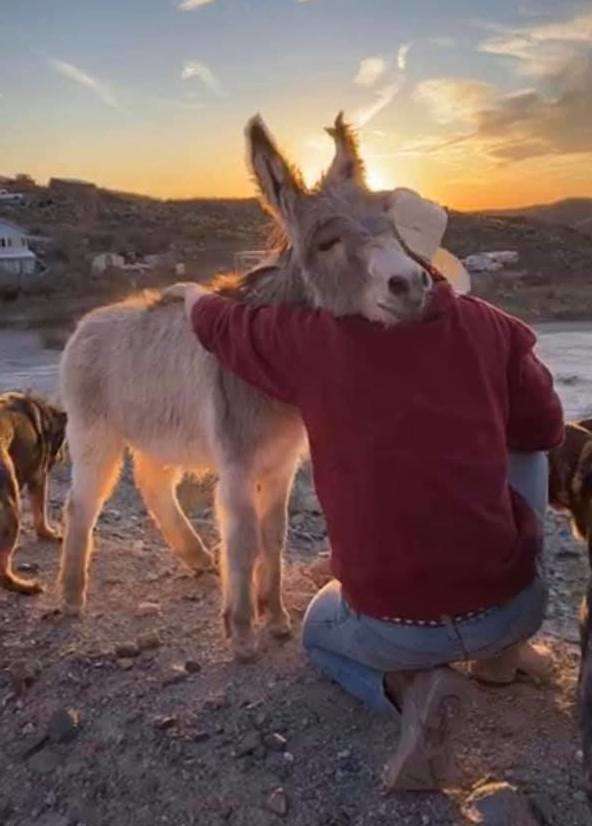 “We have three German shepherds and they all took to baby Walter from day one. They have helped us raise him and teach him house manners.”

The cute donkey has a close bond with his dog siblings and has since he was raised with them instead of his herd; he has taken on many canine behaviors. He lives inside, plays with toys, has a donkey stuffy, and even wags his tail.

Perhaps when his dog-like personality is most apparent is when his dad comes home from a business trip. He gets so happy excitement bubbles over and it is the cutest thing ever. He runs, jumps, affectionately nuzzles Blake, and wags his tail just like one of the dogs. He even spins circles and gleefully nips his dad’s jeans, just like a dog. 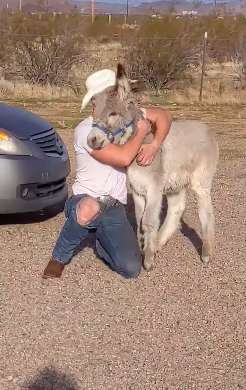 “Walter acts as though he is a dog. He wags his tail and gets excited when we come home. He hops and brushes his body against me to love on him. He even lies on the couch next to me for naps.”

Walter does almost everything the dogs get to do. When they go for their nightly walk, Walter goes too, and runs along with the dogs. He is also into community service, volunteers at charity events, and is an emotional support donkey. He even has his own Facebook page, Walter the Orphan from Oatman’s Happy New Life.